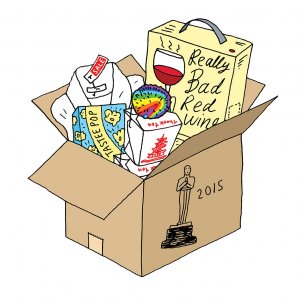 THE NIGHT BEFORE
Gather all viewing essentials. These should include:

• Chinese food
• A cheap bathrobe onto which you can drop pork lo mein in duck sauce
• Boxes of filthy wine
• Popcorn, to make you feel like you are at the movies and not just watching clips of movies you’d never think of seeing
• A Koosh ball in all the colors of the gay-pride rainbow (more on this later)

It won’t be the same without Joan Rivers asking:

• Who are you wearing?
• Who are you married to this year?
• Why are you here?
• What is that smell?
• Do you know any single, straight guys in Bel Air (East Gate) who might be interested in my daughter or me, or both of us?

Drink every time someone looks over the shoulder of the person they’re talking to because there’s someone more famous out of camera range.

• Rid yourself of distractions, including your well-meaning but dim friend who will ask, “But what’s the difference between sound editing and sound mixing?”
• Put on cheap bathrobe
• Open carton of spring rolls

Neil Patrick Harris bursts forth to host. The biggest shock of the night will be if he offends anyone, even aged Nazi war criminals watching from huts deep in the jungles of Paraguay. But on the Oscars, you never know. People who never watch TV or go to the movies or have ever heard the phrase “self-cleaning oven” invariably tune in to the Oscar show and are outraged by everything they see, hear or think they saw/heard.

Drink every time there’s a shot of an actress with ridiculous cleavage.

Bonus drink if she’s texting or checking her teeth for lipstick. Unless it’s Patricia Arquette, because she just doesn’t care. If it’s a bad year for cleavage, you can substitute a drink for each time the camera lingers on someone that no one on the planet recognizes, which means it’s the director’s spouse or the seat-filler where Marion Cotillard is supposed to be — or it’s Meryl Streep, who has stopped dressing for these things.

You will know it because it will be presented by last year’s winner, of whom you will have to be reminded. If you love the winner, have a spare rib. If you loathe the winner, here’s where that Koosh ball comes in. Fling it violently at the screen. You’ll do no harm. Repeat this all evening. Very therapeutic. People in the theater will wish they had a Koosh ball. Or any balls.

GOOD TIMES TO TAKE A WHIZ

Because you probably aren’t interested, unless Kim Kardashian‘s rear end is presenting the award.

There may be an awkward political moment when the documentary award is presented. That’s usually when it happens. But by then you won’t care. In fact, as the afternoon turns into evening, a good deal of the audience no longer cares. For each person who wins, there are four people who don’t, so the audience fills up with losers. And with seat-fillers, for losers who are so bitter they’re already at the bar or in the car, or the bar in the car. But you have no such worries. You are in a duck sauce-stained universe, watching Adam Levine manfully tackle a song you’ve never heard from a movie you didn’t see. And in a few hours, there’ll be Julianne Moore looking terrific as she hoists her Oscar high. Next year, you’ll get dressed up and go to a big party. And watch the whole thing on DVR when you get home. Of course you will. Now then, what’s on TCM?