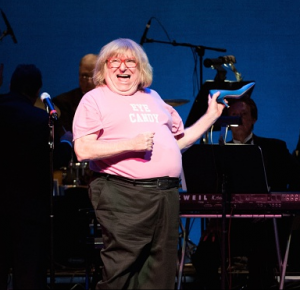 “One Starry Night: From Broadway to Hollywood,” a one-night-only musical and entertainment extravaganza in benefit of the ALS Association Golden West Chapter, was presented Monday, April 20 at the historic Pasadena Playhouse in Pasadena, CA. Thanks to performances and appearances by an exciting gathering of Broadway and Hollywood talent, and the greater Los Angeles community at large, the evening raised nearly $200,000. BWW TV’s Los Angeles Correspondent and Co-Producer Michael Sterling, along with Co-Producer/Videographer Paul Preston of Digital Mind Productions, spoke to the stars as they walked the red carpet prior to the evening’s festivities!

In addition to the performances, the Chapter’s Essey Awards were presented to notable supporters of the ALS community for their outstanding efforts in public awareness, care services, and research. The Essey Award is the Chapter’s highest honor and given annually in honor of one of the Chapter’s founding members, Richard Essey.

The Golden West Chapter recognized the following honorees for outstanding achievements in the fight against ALS:

• THE 2015 SPOTLIGHT AWARD- The Filmmakers of “The Theory of Everything”

The Spotlight Award was presented to individuals and companies who help to raise ALS awareness by educating the public about the experience of living with ALS and the impact the disease has on loved ones and caregivers. The Golden West Chapter proudly presented this year’s Spotlight Award to the filmmakers of the Academy Award-winning film, “The Theory of Everything.” The movie, its cast and crew, the companies behind its production, and its real-life subjects – the Hawking family – have inspired the ALS community.

The Spirit Award was presented to individuals who have displayed extraordinary determination while living with ALS. Richard Glatzer, who recently lost his battle with ALS, along with his husband Wash Westmoreland, adapted and directed, “Still Alice,” earning Julianne Moore a 2015 Academy Award. Shortly before receiving the green light to begin production on the film, Richard was diagnosed with ALS, yet both he and Wash persevered to complete their work on this acclaimed project. As a part of the Spirit Award’s presentation and tribute to Richard and Wash, the event was pleased to have Emmy and Golden Globe Award-winner Ed Asner and George Newbern (ABC’s “Scandal”) performing an excerpt from “Tuesdays with Morrie.”

In addition, the Golden West Chapter celebrated Cedars-Sinai Medical Center for having earned the distinguished designation as an ALS Association Certified Treatment Center of Excellence. Cedars-Sinai Medical Center is the only Certified Treatment Center of Excellence in southern California, and a flagship program in the country. Renee Zellweger presented the Cedars’ team with a plaque recognizing this outstanding achievement and Cedar’s commitment to ALS care and the search for an effective treatment and cure.

Proceeds from the event will provide funding for The ALS Association Golden West Chapter’s mission critical priorities in care services, public policy and cutting-edge global research toward treatments and cure for ALS. For further information, visit webgw.alsa.org or call (800) 750-2572.