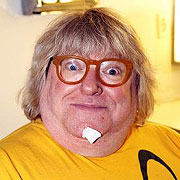 On live TV, Vilanch takes it off the chin
By Elysa Gardner, USA TODAY
On Thursday morning, Bruce Vilanch took it all off on national television.
His facial hair, that is.

The comedy writer/performer, best known to TV viewers as a Hollywood Squares regular, chose Live With Regis and Kelly as the venue to shave off the bushy beard he had maintained for 32 years.

Vilanch, 54, made the sacrifice for art’s sake. On Sept. 9, he begins previews for the new national tour of the hit Broadway musical Hairspray, in which he stars as large, lovable mom Edna Turnblad, the role that won Harvey Fierstein a Tony Award this year. The tour opens Sept. 17 in Baltimore, where the show is set.

In a pre-shave interview, Vilanch said he was attracted to Edna “because she’s hysterically funny, but she also has sweetness and humanity. The show is smart with heart ? and it’s about fat people winning, which is unusual.”

The flamboyant jokester, who has written wisecracks for the Tony, Oscar, Grammy and Emmy awards ceremonies, said that playing a woman would hardly be a stretch. “Privately, I’ve been a bearded lady for years,” he quipped.

Vilanch did seem wary as a barber named Sal approached him on Thursday’s show. “This is like root canal with hair,” the comedian moaned as Regis Philbin and Kelly Ripa tried to put him at ease. Later, Ripa cooed to a clean-shaven Vilanch, “You look so much younger. You look like a little boy.”

It was hard to tell whether Vilanch blushed, because Sal’s work had left him pink-faced, with a speck of red on his chin. “A little blood is always healthy,” Vilanch said. “It makes a man look rugged.”