BlastingNews
Musical based around Petula Clark songs opens up in Connecticut
Published on:29 July 2016 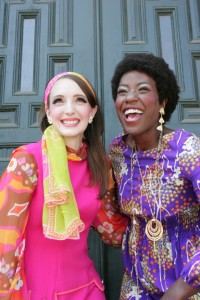 A stage-show based around the songs of the 1960’s British songstress, Petula Clark, has opened up in Connecticut, titled A Sign of the Times.

What to expect?
According to the press release, the story is not that of Petula Clark herself, despite featuring quite a good number of her songs. Instead, the play tells of an original story of a girl named Cindy who runs away from Middle America to Manhattan in the year of 1965, and the various misadventures that ensue. A press release give the show the tagline of “Forget all your troubles, forget all your cares —go “Downtown” and find out who you are!,” taken from Clark’s song, “Downtown,” which is one of the many songs featured in the show.

In the current show, Cindy is played by Ephie Aardema, a Broadway veteran. Other actors include Robert Lenzi, Bryan Fenkart, Nick Bailey, and Crystal Lucas-Perry. Esnsemble includes Lauren Boyd, Lauren Nicole Chapman, Jeremy Gaston, Alexandra Matteo, Kevin Santos, Keven Quillon, Dave Schoonover and Alet Taylor, many of whom have appeared in Broadway shows as well as other shows for the Connecticut theatre.

The book or libretto was written by Bruce Vilanch and the story was created by Richard Robin. Gabriel Barre serves as director. JoAnn M. Hunter serves as a choreographer. Performances will begin July 29 and will last until early September at the Norma Terris Theatre, which is owned by the Goodspeed Musicals theater company, in Chester, Connecticut. Tickets can be purchased through the theatre’s box office or online at Goodspeed’s website.

The show includes such popular Clark songs as “Color My World,” “Kiss Me Goodbye,” “Who Am I,” “Call Me,” “Don’t Sleep in the Subway” and “The Boy From New York City,” in addition to the namesake song, which can be seen below.

That said, Petula Clark is not the only icon of the Sixties to be a part of the show. In addition, the show is said to feature songs from other artists of the decade, such as Lesley Gore’s “You Don’t Own Me” and the Fontella Bass number, “Rescue Me.” Even one Elvis number, “If I Can Dream,” will appear in the show. #Music