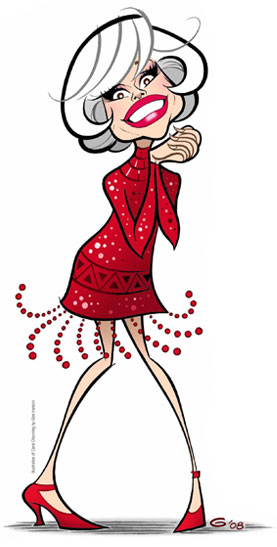 â€œCarol Channing Larger than Lifeâ€ is the title of a documentary by Dori Berinstein and the perfect description of its subject because Carol Channing was born larger than life. Growing up in San Francisco, as a child she helped her mother distribute â€œThe Christian Science Monitorâ€ backstage at the Curran Theater. Overwhelmed by the â€œchurch-likeâ€ atmosphere in the theater, Carol knew instantly that she wanted to hold court on center stage. The girl with the wispy blonde hair, big eyes and too large mouth knew that she was destined to be a star and a star she became. Carol was Lorelei Lee and Lorelei was Carol Channing, just as much as Dolly was Carol Channing and Carol was Dolly Levi. As Bob Mackie points out in the film, â€œIt doesnâ€™t matter who the character is, itâ€™s always Carol.â€

At the age of 90+, Channing is still performing, which should come as no shock. There has always been sweetness to her persona and it is underscored by her personal love story. Married, unhappily for far too many years to her manager Charles Lowe, she finally divorced. A few years later, she was reunited with her first boyfriend whom she met at Aptos Middle School at the age of 12. She spoke of him fondly in her memoirs and he sought her out despite the fact that they had not seen one another for 70 years. She and Harry Kullijian were married in 2003 and the two octogenarians toured together as Carol played the auditorium circuit. Sadly, Kullijian died in December 2011.

If you are a fan of musical theater, you cannot help but be entranced by her story. Single minded of purpose, she lived a self-focused life that was true to the title of her memoir â€“ Just Lucky I Guess. She acknowledges her inadequacies as a parent to her one son because a life in the theater is all consuming. Tireless, she did not miss a single performance in her signature show â€œHello Dolly,â€ once telling her understudy JoAnne Worley to relax because sheâ€™d never be going on, and she never did.

In an on-camera interview, Jerry Herman, creator of â€œHello Dolly,â€ recalled how David Merrick, the producer, had wanted the show created for Ethel Merman. Working tirelessly, Herman wrote all of the songs for Mermanâ€™s range and style only to be told after completion that Merman no longer wanted to work on stage. (Ironically, she would be one of the Dollys who followed Channing, a group that even included Phyllis Diller.) Distraught and frantic, Herman didnâ€™t know what to do until Channing was brought to him. After talking to her endlessly, something both liked to do, he shut himself in his room and rewrote the entire score overnight. As he squired Channing around town prior to rehearsals, he ecstatically introduced her everywhere to anyone who would listen as his Dolly. For Channing it was the role of a lifetime and she never relinquished it. As Herman pointed out, â€œWhen you create a role, it follows you for life.â€ And indeed it has.

Carol Channingâ€™s life in the theater has produced many friends and it is delightful to hear the stories, especially those of Marge Champion, theatrical partner and wife of Gower Champion, director of â€œHello Dolly.â€ It was Marge who had spotted Carol in a revue out of town and brought her to Gowerâ€™s attention when he was casting his first Tony Award-winning show, â€œLend an Ear,â€ introducing Carol to New York audiences. So many other entertainment luminaries comment on her influence, from Bruce Vilanch, who wanted to be her, to Betty Garrett, her roommate when they were both performing in the Borscht Belt in the Catskills in the 30â€™s. It was there that Carol was fired for the first time, but her resilience got her through the experience, telling a distraught Garrett that â€œSomeday heâ€™ll be remembered as the man who fired Carol Channing.â€ How generous, because whoever he is, heâ€™s no longer remembered at all.

Truly a valentine to Ms. Channing, this is not an in depth study of the woman, so donâ€™t expect any dark secrets to be revealed. Berinstein glosses over all but the cheery and laudatory, filling out her rapidly paced 87 minute film with commentary by a number of questionable commentators. Figuring most prominently among the head scratchers is Loni Anderson, a bottle blonde (Channing was a natural) with a large mouth and marginal, at best, talent and an even more marginal relationship with Channing who doesnâ€™t seem to have met anyone she didnâ€™t like (ex-husbands excepted).

If you love theater, especially musical theater (and I know youâ€™re out there), then there arenâ€™t too many more pleasant ways to spend an hour and a half. Itâ€™s pure fluff, but sheâ€™s a legend. Itâ€™s no surprise that she never really succeeded on television or film because Carol Channing truly is larger than life.