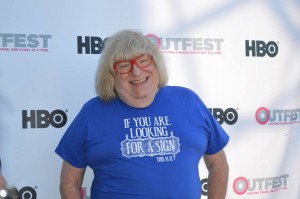 No one speaks of [HIV/AIDS] anymore and that truly saddens me, to paraphrase comedian Sandra Bernhard. But in 1981, it replaced hepatitis and mono as the topic on everyone’s lips.

“This thing came, but the devastation was so total,” Vilanch told SF Weekly. One week someone had a cough and the next week they were dead. No one knew what was happening, but there seemed to be so many gay people that it was happening to. And it resembled pneumonia, so we called it the gay pneumonia. It wasn’t even identified as AIDS till years later, so it was this horrible, baffling thing.“

While HIV cocktails have turned the deadly virus into a more manageable one, those who live with it still struggle to pay for cost-prohibitive medications and in some places to acquire safe housing. That’s why events like The Richmond/Ermet Aid Foundation’s one-night-only cabaret benefit Motown & More, An Evening of Music, Dance & Comedy with Special Guests Bruce Vilanch and Countess Katya Smirnoff-Skyy remain vital.

Vilanch spoke to SF Weekly about the continued importance of AIDS benefits, holding out for a cure and whether it’s too early for AIDS jokes.

What can you tell us about Motown & More?

I’ll be cohosting and doing comedy mostly. I don’t have any plans to do any musical stuff, but you never know. Between now and then, we might cook something up. I just hate to pin myself down.

This is also a great opportunity for the kids singing Carol King eight times a week to sing anything but Carol King. Since Carol King wrote a lot of stuff for rhythm and blues acts during her Brill Building period, there’s a lot of Motown-y stuff in that show, and they’re going to get to sing that stuff that they can’t sing in her show. So that’s what makes it so much fun.

How did you first get involved with Richmond/Ermet’s One Night Only shows?

Well, I’ve been doing stuff for Richmond/Ermet for a long time. They do two big shows a year: Help is on the Way in the summer and Help is on the Way for the Holidays around Christmas. I’ve done a bunch of those at the Palace of Fine Farts. When I was in Hairspray, we toured the country for a year and we made it our business to take our Monday nights, which were dark and turn them into AIDS benefits for local charities, and Richmond/Ermet does the same thing.

When one of these musicals comes into town, they get the cast on a Monday night to sing everything else. The cast loves it because they get to sing something else and Richmond/Ermet is such a wonderful, close-to-the-ground charity, where all the money goes directly to the people who need it. They have a very low overhead. They’re not in the charity business. They’re really doing a great public service, so you get a great feeling of contribution.

People are still struggling with HIV/AIDS, yet there isn’t a single awareness-raising red ribbon to be seen at major awards shows anymore. People don’t talk about AIDS to the extent that they used to.

That’s because of the cocktail. With the drugs that are available, people are living longer. They’re not dying at the rate they were years ago. But at the same time, those cocktails are incredibly expensive and people need the support. Of course, the thing hasn’t been cured yet and it would be nice if one of these drugs was actually like a polio vaccine and could wipe it out. So, of course, the research and the work continue and that needs financing, too.

But Richmond/Ermet is not about research. They’re about helping people who have it and live with the financial burden and providing services for them. I think when people find out what this organization is about they see how worthwhile it is and begin talking again. When you stop the dying, then people’s attention shift to something else. That’s what we’re like.

How did the gay community handle the epidemic 45 years ago?

As the contours of it became clearer, the gay community realized that the only way we were going to do anything about it was if we banded together. What had been the beginnings of a political liberation movement that had been gathering steam since Stonewall transformed into an AIDS movement. The government wasn’t going to do anything because they were as scared as anybody else, so it was up to us to force them to do things.

Talk to us about your own personal involvement.

I got involved on the show business level, because show business is the great fountain of money when it needs to be, and you do that by putting on shows and raising a lot of money. That’s what we did with the people who were willing to identify themselves with it and that was generally people whose lives had been affected by it like Joan Rivers, Bette Midler and Nell Carter. Once Rock Hudson identified as an AIDS patient, then the floodgates opened and Elizabeth Taylor got involved and real charities began to be formed.

Are you still haunted by the ghosts of loved ones lost to AIDS?

All the time. I live now in a loft in West Hollywood and through one of my windows can look up at the Hollywood Hills. I point out houses of people who are dead. I knew them all. It’s a visceral reminder of all the people who used to be here who aren’t anymore. I think, as you get older, visions of people who you’ve lost begin to appear to you at the oddest times. But in the case of people like me, we lost so many people when we were young that we were not supposed to lose that it’s double what it would be for most people. To have a mass of people go at the same time was devastating and unprecedented.

What are the challenges, aside from overpriced medications, still faced by HIV-positive people today?

There’s still discrimination. People ask me why I continue to do benefits, and I say because no one with breast cancer was ever forced to leave an apartment because they have breast cancer. This is one of the few conditions in the world where you’re still made to feel like a leper in some places.

Will we see a cure in the near future?

Yeah, of course. I may be a cockeyed optimist, but we do have cures for things that used to be the scourge of the planet and I think we can find a cure for this. I suspect that we’re close because they have already found a way to contain and manage it, so they’re just a couple of hills away.

We often look for humor in the things that most distress us. That said, since you’re a comedy writer, I have to ask … Is it still too early for AIDS jokes?

I think people who have it can do that. But I think it’s difficult for anybody else to try and do it unless they’re going to make a comment about the fact that they’re doing it and that it’s too soon.