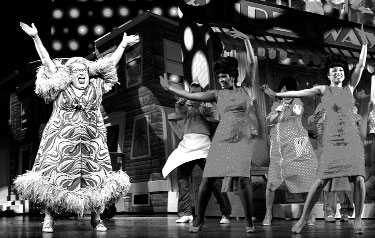 At: Ford Center at the Oriental Theatre, 24 W. Randolph St.
Runs through: Feb. 15

John Waters’ 1988 film paid homage to the teen-power movies of the pre-Beatles era. The 2002 musical likewise champions adolescent underdogs, while imposing a distinctly modern spin on its nostalgic roots. It also marks a significant step in the integration of rock ‘n’ roll music with the traditional Musical form.

From Hair (1966) to Rent (1996), marketers seeking to attract Baby-Boom Bucks have hawked their product as the definitive “rock musical”. But composers Marc Shaiman and Scott Wittman’s score is not the same old warbles, tricked out with amplified bass. Nor have scriptwriters Mark O’Donnell and Thomas Meehan simply cobbled a scenario onto a few period ditties, à la Mamma Mia. The songs may replicate the structure and harmonies of their 1962 setting (discerning ears will catch hints of “Peppermint Twist”, “Higher and Higher” and “Mickey’s Monkey”), but they are undeniably original compositions serving a likewise carefully conceived social message.

The plot’s immediate theme is the end of racial segregation on Baltimore television’s “American Bandstand” knockoff. The secondary subtext, however, is intragender rivalry, with the Miss Hairspray contest the battleground for the spoiled Amber Von Tussle, the airheaded Penny Pingleton and our unlikely heroine, the rebellious Tracy Turnblad, whose refusal to succumb to the prejudices of the status quo—including its scorn of chubby girls—leads to the liberation of her peers, the fulfillment of her parents’ dreams, and the affections of her chosen boy-babe. You GO, girl!

The cast of this touring production embrace their archetypes with gleeful exuberance, quick-stepping through Jerry Mitchell’s athletic dances at a pace to make Jennifer Beals’ flashdancing acrobatics look like a skater’s waltz. Hometown favorite Chester Gregory II, on Christmas leave from the Broadway company, distinguishes himself in the role of the supple Seaweed J. Stubbs, while Blake Hammond portrays a variety of patriarchal windbags. But it ain’t over until the Fat Lady sings, and the plus-sized Carly Jibson’s Tracy dominates every scene in this 2-1/2 hour show, flanked by the ample Bruce Vilanch as a formidable Mrs. Turnblad. Together they constitute as impressive a pair of bodacious belters as ever earned their happily-ever-afters.