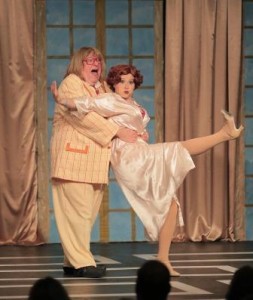 San Francisco’s 42nd Street Moon recently revived Du Barry Was A Lady with Bruce Vilanch starring as Louie Blor (the role created by Bert Lahr on Broadway). The plot revolves around a simple device: Blor is the ladies washroom attendant at a nightclub who has won the lottery. Although he’s in love with singer May Daly, she’s in love with her friend Alice Barton’s brother, Alex.

When Louie’s replacement, Charley (Jordan Sidfield), suggests that Louie can succeed at wooing May by giving Alex a Mickey Finn, Blor gets distracted and forgets which drink is intended for Alex. After passing out, he dreams that he is really France’s King Louis XV and that May is the beautiful Madame Du Barry. Complications quickly ensue.

As it turns out, Louis XV’s chances of hooking up with Madame du Barry are equally dismal. But the show allows for some delightful costume work, visual sight gags, and a great deal of mugging on Vilanch’s part. 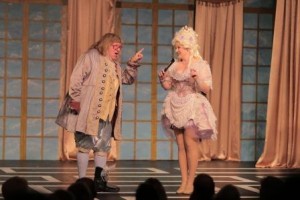 What becomes most apparent from watching Du Barry Was A Lady onstage is that they no longer write new musicals for actors with the kind of personality and stage appeal that a great comic like Bert Lahr developed while working in vaudeville and burlesque. Nor are there any unique voices around today (like Merman’s) which might inspire a Broadway composer to write a show with one particular singer in mind for the leading role.

It’s difficult to resist the bawdy charms of a script whose minor roles include Fondue, Paingrillé, La Marquise de Gruyere and La Comtesse de Roquefort. While Vilanch delighted the audience whenever he was onstage, 42nd Street Moon’s production of Du Barry Was A Lady benefitted handsomely from Ashley Rae Little’s brassy performance as May Daly as well as Zack Thomas Wilde’s direction and choreography. 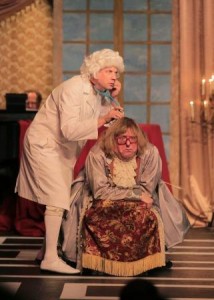 As Alex, Jack Mosbacher scored strongly with Porter’s romantic ballad, “Do I Love You?” In supporting roles, Nicole Renée Chapman doubled as Alice Barton and Alisande de Vernay while Jordan Sidfield (whose toothy smile evokes memories of Robert Morse and Tommy Steele) drew comic relief as the streetwise Charley and the goofy Dauphin who has a fetish for taking apart watches. Others in the cast included company regulars Ryan Drummond, Rudy Guerrero, and Nathaniel Rothrock.

While this may not be Porter’s strongest score, it’s great to have a chance to see a Broadway hit that has fallen into oblivion (the 1943 film starring Red Skelton and Lucille Ball with a young Zero Mostel as “Rami the Swami” is a real clunker).