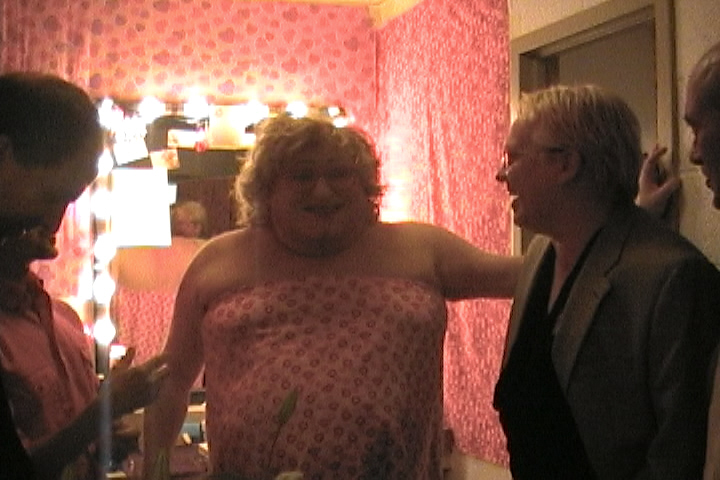 Bruce Vilanch doesn’t know what to stroke now. For 32 years, it was his beard – a big patch of frizzled blond hair – which he would pull and pluck while thinking profound thoughts and creating surefire yucks for Whoopi Goldberg, Bette Midler, Steve Martin, Billy Crystal, not to mention Steven Seagal, Racquel Welch and Donny and Marie.

But for the role of Edna Turnblad, the big-boned Baltimore hausfrau with a heart of ham, which Vilanch plays in the national tour of the Broadway musical “Hairspray,” he had to be shorn. For the sake of low comedy and high publicity, there was a public shaving earlier in the summer on “Live With Regis and Kelly.”

“Only a couple of people have asked me if I was Shelley Winters,” says a puckish Vilanch at a restaurant near the rehearsal studio where he was preparing for the role, which earned Harvey Fierstein a Tony award. “Sometimes they say I look like Joan Blondell or – ” his face and voice falling now – “Margaret Rutherford.”

Limping in for the interview, Vilanch makes reference to a knee brace, the result of a fall at “what will eventually be the Vilanch Hotel in Florida.”

In person, Vilanch comes across as a gay, wisecracking hobbit on steroids (or Doritos), as comfortable and giggly as if he were sitting on “Hollywood Squares,” a seat he has warmed over the years as one of the TV game show’s regulars and head writer. Without the beard, Vilanch has morphed from a Santa to a full-figured elf. Dressed and made-up as Edna, he is kindler, gentler, but no less sassy than Sophie Tucker.

He says he was perfectly happy with the way he looked pre-Norelco, but he was “in abject terror, actually shaking,” for the Big Shave. “This is like root canal with hair,” he said on the Regis show.

But when it was over, he looked in the mirror and thought, “I’m Divine,” referring to the actor who originated the part in the 1988 John Waters film. The film inspired the silly, subversive musical about a fat girl in Baltimore in 1962 who dances with abandon, stands up for civil rights and wins the handsome boy. The tour’s second stop is Hartford’s Bushnell Center for the Performing Arts, where the show opens Tuesday for a two-week run. The tour then continues on to Boston and Providence.

Vilanch says he grew the beard in the early ’70s for a film, “Rocco in Chicago,” which was being shot in Chicago. That film, he says, “had the distinction of being the only Marcello Mastroianni movie to flop in Italy.”

“And when it was over, I said, `As God is my witness, I will never shave again!'”

When Vilanch became well-known as a comedy writer and later as a guest on talk shows and on “Hollywood Squares,” the look became more of a trademark – as well as a sight gag.

“Some people say I look younger without the beard, but I’ve discovered I also have waddles,” Vilanch says. “They were camouflaged for years. But now I’ve discovered a whole new face. Actually, I’m kind of amazed. I found out that I’d sometimes be sitting quietly, breathing through my nose, and I’d feel this breeze on my chin, and I’d think, `Where is that coming from?’ And I’d go, `Oh, it’s me.'”

This is not the first time Vilanch has been in drag. “I did some dress-up things for benefits over the years,” he says.

But more devotedly, he was in a Cheech Martin sitcom in the late ’80s in which he played a character in a dress – and a beard – named Louella Fella, a society columnist. “And whenever she would appear in a scene, someone would say, `But she has a beard.’ And someone else would nod and say, `Hormone problems.'”

When it came time to cast the national tour for “Hairspray,” Vilanch was intrigued. After all, though he knew his way around a backstage – most notably supplying gags for the Oscars and other awards telecasts – the musical stage was not his milieu.

“I thought it would be interesting to have a second act to my life after writing for others, and the TV show and writing every award show in captivity. I thought, `How many people have the opportunity to do something so completely different?'”

It also helped that he was a close friend of the show’s composer, Marc Shaiman, and his partner as well as co-lyricist of the show, Scott Wittman. “Three years ago, I did a one-man show [`Almost Famous’],” Vilanch says, “and Scott directed it, and they both wrote a great opening song, `We’re the Queens Behind the Scenes.'”

Vilanch says that in the casting for the national tour, it was determined Edna would be played by a man. “John Waters, I understand, is quite adamant about that,” Vilanch says. Still, he did his best to keep his hirsute look.

“I tried to sell them on the concept of Edna being a bearded lady, but they thought it was a little too John Waters. They said audiences have to make one big `buy’ to know that a big, fat man with a deep voice is playing the part of a woman. They didn’t want to make it a second `buy’ with a character that has genuine hormone problems. But they said I could keep the eyeglasses (which, along with his sloganeering T-shirts, have become part of Vilanch’s trademark.)

As for the singing?

“I wanted to sing as well as Harvey,” he says, “so I started taking coaching from Bea Arthur. Seriously, I did take lessons because I wanted to be in vocal shape just to get through the material and do eight shows a week. But it’s not a Mama Rose singing role.”

So now that Vilanch is no longer a behind-the-scenes writer or another `Square,’ is it good to be the star, and is it diva time for Bruce?

“I asked Jennifer Lopez to send over her handbook to see if I could get a few pointers,” he says. “It’s wonderful to be the star, especially when you’re exhausted from rehearsals and it’s pouring rain and you mince into your private car and drive off while others are running for taxis and the subway. I said [to the show’s producers] that I couldn’t do this if I couldn’t be as comfortable as I am in my real life at home in Los Angeles. I wasn’t going to do the backpack thing and do the gypsy rush and all those things you do when you’re 20 years old ’cause I’m not 20 years old.” He is 54.

Vilanch was born in New York and grew up in Paterson, N.J., where he was adopted by Jonas and Henne Vilanch, an optometrist father and a mother who loved to appear as a showgirl at charity events. After an early career as an actor failed to materialize, he became a feature writer for the Chicago Tribune. His review of Bette Midler’s cabaret act in 1970 attracted the singer’s attention, and they formed a friendship as well as a writing association.

He moved to Los Angeles, where he wrote for variety shows (“Donny and Marie,” “The Brady Bunch Hour”) and provided material for Richard Pryor, Lily Tomlin and Joan Rivers. Along the way, he performed small parts in films such as “Mahogany,” “Breathless” and “The Morning After,” but he soon discovered that his forte was writing. He became the go-to man whenever a script, nightclub act or awards show needed punching up.

His ubiquitous presence was so almost-famous that a documentary was made in 1999 called “Get Bruce,” which features stars rhapsodizing about Vilanch’s talents. “This man cracks my ass with laughter,” says Robin Williams. Vilanch is not giving up his day job of comedy writing, though his focus has been the show, which opened last week in Baltimore. (“Not since `Gone With the Wind’ opened in Atlanta has there been such excitement,” he says.) “But once we’re on the road and performing, it will be easier to write again.”

One can imagine the “Seabiscuit” jokes swirling in his head for next year’s Oscar telecast, though he will still be on tour.

He’s already planning to work on Bette Midler’s new concert tour, tentatively titled “Kiss My Brass,” which starts Dec. 4 at a city yet to be determined. “It’s the `I’m-Not-Retiring-And-You-Can’t-Make-Me’ Tour,” he jokes.

“Hairspray” plays Hartford’s Bushnell Center for the Performing Arts Tuesday through Oct. 5. Performances are Tuesdays, Wednesdays, Thursdays and Sundays at 7:30 p.m. (8 for Tuesday’s opening night); Fridays and Saturdays at 8 p.m.; and Saturdays and Sundays at 2 p.m. Tickets are $22.50 to $78. Tickets and information: 860-987-5900 or www.bushnell.org.
Copyright 2003, Hartford Courant