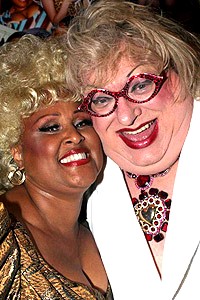 Released by WE: Women’s Entertainment
Dust Off Your Hammer Pants, Polish Up Those Platforms, and Buff Up The Bling…

WE Celebrates Four Decades of Fashion’s Low-Lights With I Can’t Believe I Wore That, December 5-8 at 10:00pm ET

Hosted by Bo Derek and Dave Coulier with appearances by Leif Garrett, Barry Williams, Charlene Tilton and others

Los Angeles, CA, July 17, 2005 — How many times have you looked at a photo from your past and wondered aloud… “I can’t believe I wore that?” WE: Women’s Entertainment invites everyone to embrace their former fashion faux pas with the aptly titled I Can’t Believe I Wore That, airing December 5-8 at 10:00pm ET.

The four-part series, hosted by Hollywood beauty icon, Bo Derek and actor/comedian, Dave Coulier, will gather celebrities and fashionistas of the 70s, 80s, 90s and today to discuss the fashions they helped to make famous and are now infamous for being bad.

I Can’t Believe I Wore That In The 70s

Hip huggers, bell-bottoms, polyester leisure suits and Valerie Bertinelli’s hair-wings, there’s plenty about the 70s we would like to forget. The decade that brought us Studio 54 and Saturday Night Fever also brought satin jackets, platform shoes and super short track shorts. Trendsetters like Barry Williams and Leif Garrett join comedians and designers to dish on the 70s fashion and the people that made them dyn-o-mite!

I Can’t Believe I Wore That In The 80s

The decade of decadence is still influencing today’s fashions, but there are plenty of styles modern fashionistas would not be caught wearing. Shoulder pads, parachute pants, leg warms and Jennifer Beals torn sweatshirt are just a few of the style don’ts this decade produced. From the glamour of Dynasty, to Cliff Huxtable’s Coogi sweaters, the 80s had a wide range of design disasters. Charlene Tilton and Jordan Knight are just a few of the celebrities confessing their fashion faux pas and pointing out those of their peers.

I Can’t Believe I Wore That In The 90s

From 90210 preppy to Seattle grunge, the 90s did not discriminate when it came to bad fashion sense. Flannel shirts, backpack purses and polka dots on everything were just some of the styles that were then totally hot – and now totally not. Debra Wilson (Mad TV), Jeff Timmons (98 Degrees) and stylist Nol? Marin are just a few of those discussing exactly when it became cool to wear your jeans two inches below your Calvin Klein underwear. So affix your “Monica” beret atop your “Rachel” haircut and admit that you too tried to swing dance like the kids in the Gap Khakis ad.

I Can’t Believe I Wore That In The Millennium

Believe you won’t regret anything you’ve worn in the past five years? Think again. Ugg boots, velvet jumpsuits, gratuitous bling and tiny dogs as accessories, millennium style is getting off to a rocky start. The “Carrie Bradshaw” nameplate necklace was a must have just a few years ago, ghetto fabulous is still the norm throughout the country and metrosexuals liter our city streets. Laura Dern, Tom Arnold and Bruce Vilanch join other celebrities and style mavens investigating the fashion fallout of Y2K.

The series is produced by Martin-Calvert Productions, based in Los Angeles, CA.