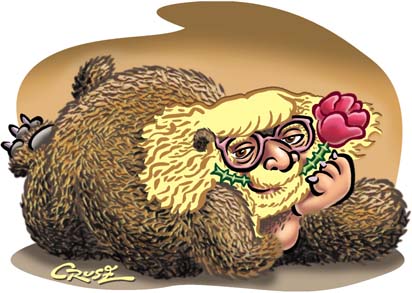 You can tell from the bulky body and jovial face, familiar to viewers of “Hollywood Squares” and the movie “Get Bruce!”

But you also can tell by the one-liners introduced by Vilanch, famous as the go-to gag man for the Oscars, Emmys, Grammys and Tonys.

“Careful, Wilbur – I’m a desperate housewife,” says Vilanch, as husband Wilbur clutches her falsies during the second-act “Timeless to Me” number.

Or later – same song, same clutch: “What do you think these are, the Golden Globes?”

Those are some of the quips that Vilanch is using these days to put his own stamp on a role that was created by the late transvestite comedian Divine in the 1988 John Waters movie, and by Harvey Fierstein – who has since graduated to “Fiddler on the Roof” – in the 2002 Broadway musical version.

The Vilanch zingers began when the quipster joined the touring company of “Hairspray” in September 2003 and continued when he took over the Broadway run on Oct. 5 from interim star Michael McKean.

“It started when we opened in Baltimore,” Vilanch says. “The first night we were rained out by Hurricane Isabel, I think it was. The whole downtown area was flooded. The second night, when he grabbed [my breasts], I said, ‘You know, Wilbur, if this town ever floods, we can float out on these.’ The audience loved it. The director said, ‘Can you think of something to say in Hartford?

With Vilanch in the lead, “Hairspray” definitely, er, holds up. So much so that his Broadway run has been extended to Labor Day.

Vilanch, a Paterson native, hadn’t done professional musical comedy before. But he’s enough of a wit offstage – and enough of a ham on it – to rate favorable comparisons with his pal Fierstein in this still-fresh, engagingly odd musical about misfit teenagers who muscle their way onto a 1960s Baltimore TV dance show (which they integrate in the process).

“This show is all about acceptance,” Vilanch says. “It’s about accepting who you are at what weight you are, and accepting other people for what color they are.”

Though Vilanch has no plans to give up his main gig as gag man to the stars (among his clients over the years: Whoopi Goldberg, Billy Crystal, Robin Williams, Barbra Streisand, Bette Midler and Carol Burnett), he definitely has the musical comedy bug.

“I want to do ‘The Sound of Music’ now,” he says. “I’ll show them how to solve a problem like Maria.”