Hollywood Reporter
Miss Golden Globe: Past Honorees Tell All – Nepotism Has Never Been Hotter
by Seth Abramovitch
January 05, 2017, 6:15am PST 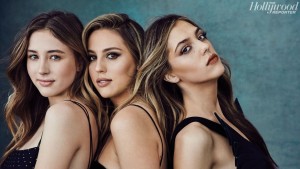 Sly’s kids join A-list offspring from Laura Dern to Dakota Johnson as alums dish on the gig their parents love: “He was so honored,” says Gia Mantegna of father Joe’s reaction to her selection in 2011. “It was the fact that your parents had a career in Hollywood that was respected.”

Scarlet, Sistine and Sophia Stallone were lounging in the living room of their family’s Beverly Hills estate when their father — that would be Sylvester — announced that he’d just been on the phone with Lorenzo Soria, president of the Hollywood Foreign Press Association. The trio, ages 14, 18 and 20 (more about them here), had been chosen to share the honor of being 2017’s Miss Golden Globe.
“We all started screaming and jumping up and down, music blasting, dogs barking,” recalls eldest sib Sophia. “We didn’t think we would get it.” Perhaps they did not, but just about anyone else could have scanned the checklist — stunning, personable, fruit of the loins of a genuine Hollywood legend (and 2016 Golden Globe winner for Creed) — and seen the Stallone girls as shoo-ins.

In truth, the competition for Miss Golden Globe — the young women (and sometimes young men) who help hand out trophies and escort the winners on and off the stage at the HFPA’s annual awards ceremony — can get hairy. It may not be a speaking part, but it’s still a gig performing onstage at one of the biggest awards shows of the year, a chance to make a first impression not just on the Hollywood elite but on millions of viewers (18.5 million in the U.S. alone in 2016). For many actresses — Anne Archer (1971), Laura Dern (1982), and Melanie Griffith (1975) and her daughter Dakota Johnson (2006) — it’s among the very first screen credits on their résumé, while for others, like Candace Savalas (1987), Lisabeth Shatner (1985) and Lily Costner (2004), it’s also the last.

To qualify for the title, candidates must be poised, polished and harbor the DNA of a bona fide A-lister, although lineage has not always been among the criteria. When the HFPA first created the title in 1963, the honor was bestowed upon a pair of more or less randomly selected up-and-coming actresses, one from the world of film and one from TV: Donna Douglas (Elly May on The Beverly Hillbillies) and Eva Six (a Hungarian actress whose career didn’t quite pan out). “It was the very first award ceremony I ever attended,” says Linda Evans, Miss Golden Globe 1964, of her memorable night schlepping shiny hardware. “It was something MGM arranged for me to do,” recalls the 74-year-old Dynasty star. “They dressed me up, sent me there, I gave out the awards — and the rest is history.”
In 1971, though, the HFPA made a change: From that time forward, the title would be granted only to the offspring of the stars, preferably those with two famous parents. The shrewd move began what’s since become a Hollywood birthright and sparked a vigorous free-market competition among the town’s co-mingling gene pools. The next big change came 24 years later, when, in 1995, the club went co-ed, naming John Clark Gable, Clark Gable’s only son, the first Mr. Golden Globe (then 34, he also was the oldest ever chosen). “Truly an honor,” says Gable of the experience. “For the first time, they asked a male heir.”

The custom is not without its fans. “I love the Miss Golden Globe tradition. So retro. So old Hollywood. So ‘A Star Is Born,'” says New York awards season event planner Peggy Siegal. As for any aroma of entitlement, longtime Oscars head writer Bruce Vilanch is quick to wave it off: “Please — nepotism has never been hotter. Just look at the Trump kids! The Golden Globes are always ahead of the curve.”

The process of selecting a Mr. or Miss Golden Globe is not chiseled in stone. Some years it’s a more grueling gantlet than others. “There were about five of them in there,” remembers 24-year-old Greer Grammer (Kelsey’s daughter) of her interview with the HFPA at its Robertson Boulevard headquarters for the 2011 awards. “They asked, ‘What are you doing? What are your career hopes?’ I remember one person telling me that Frasier was more popular in England than in the United States, which I thought was hilarious.” Grammer had just been cast in the MTV series Awkward, and was feeling pretty upbeat about her prospects. “But I didn’t get it,” she says. “I was so sad because I had done pageants before, so I thought I’d be perfect.” Gia Mantegna, daughter of Joe Mantegna, remembers her audition that same year: “[They asked me] about my life and my career and what it meant to be the daughter of someone in the industry,” recalls the actress, now 26. “To be honest, I wasn’t familiar with what Miss Golden Globe was. [My father’s publicist] just told me to show up to this building and go on this interview. It seemed silly. Like, what is this? This is not anything I’m earning on my own. This isn’t a job. I’m just doing this because my dad’s an actor.” She ended up getting the gig.

Other years, the selection process has been considerably more laid-back. 2016’s Miss Golden Globe, Corinne Foxx, the 22-year-old daughter of Jamie Foxx, received a phone call “out of the blue” informing her she’d been chosen. “I was completely shocked,” she says. The same thing happened to Grammer, who in 2014, three years after being rejected, also received a call from the HFPA finally offering her the job. “I didn’t even have to go in for an interview!” she says.

There is no Miss Golden Globe training. Instead, the anointed are thrust into a whirlwind of nomination announcements, red-carpet appearances, pre-parties and rehearsals. Foxx says she “went into complete research mode” when she got picked. “Greer Grammer was the year before me, so I watched YouTube videos of how she gave out all the trophies.” The heavily publicized Miss Golden Globe party — the Stallone daughters’ was held at Catch on Nov. 11, though their selection had been leaked a few days earlier — serves as a dry run. “You are given a welcome by the HFPA president and you deliver a speech,” says Grammer. But those who’ve held the title say nothing prepares you for the physical (and even emotional) intensity of the job itself. “I didn’t realize how involved you are onstage,” says 2010’s Miss Golden Globe, Mavis Spencer (daughter of Alfre Woodard). “You have to give the winner the award and then move them to this mark. Then you have to move everyone off the stage and behind a wall. You’re running the show a little bit — it’s not just standing there being a pretty face. It isn’t as easy as you think, especially after the actors have gotten a few drinks into them.” Mantegna says she worked closely with the stage manager, “basically corralling everyone on and off. One of the scariest moments for me was seeing how comfortable everyone was just lingering.”

Spencer discovered this the hard way after The Hangover won best comedy or musical motion picture and “like 12 or 15 of them” rushed the stage, a task she likens to “herding sheep.” One of the Hangover crew — she’s not sure who — accidentally stepped on her foot, fracturing two bones. And that was not the evening’s only indignity: “I had a 6-inch pair of Valentino stilettos on,” says Spencer, who stands 5-foot-11 in flats. “Colin Farrell was one of the presenters and just looked at me and said, ‘I’m not standing next to her. I’m not doing it.’ I was a bit taken aback. And he was like, ‘Darling, I really don’t mean that in a bad way — but you’re huge.'”