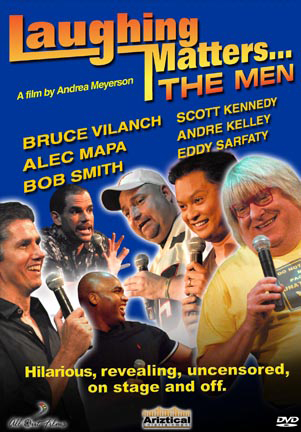 Synopsis:
“While some gay comics seek to refute common stereotypes, others thrive on them,” (All Movie Guide)…and nobody turns a “label” into laughter better than the six stellar comedians featured in Laughing Matters…The Men! Shot in five days at the Palm Springs Gay Pride Festival, this third in a series of award-winning OUTrageous comedy films from All Out Films interweaves witty stand-up material with candid conversations, all guaranteed to bring viewers tears of laughter and a flush of heartfelt gay pride.

Whether you’re rolling in the aisles from the comedic genius of two-time Emmy winner Bruce Vilanch (Outstanding Writing, The 63rd Annual Academy Awards) or busting a gut over Bob Smith, the first openly gay comic to appear on The Tonight Show Starring Johnny Carson, you’ll find 83 minutes of nonstop entertainment in Laughing Matters…The Men. Also featuring Alec Mapa, an “Ugly Betty” and “Desperate Housewives” regular; Scott Kennedy, a self-proclaimed “pink-neck” from Texas with his own Comedy Central special; Andre Kelley, a hunky headliner on Atlantis Cruises; and Eddie Safarty, who has had them hysterical on The Today Show and Nightline, this film is more than just funny, it’s a rousing tribute to being out and proud.