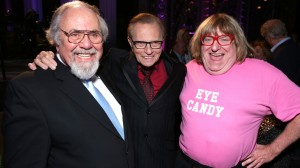 Hollywood and academia had a mutually beneficial pairing on Sept. 25 when Pepperdine University honored alumni George Schlatter at the Saban Theatre. While an evening centered around the Malibu school that’s affiliated with the Churches of Christ might have had more gravity, Schlatter had a half-century’s worth of remarkably good TV comedy clips to entertain the audience.

Larry King acted as emcee, and the evening began with remarks by Pepperdine’s Craig Detweiler and Schlatter’s daughter Maria, who said her father once quoted Fred Astaire on the right way to put on a show: “Get it perfect; then cut two minutes.” Of course, this didn’t happen. The show that Schlatter produced himself ran at least an hour longer than planned, but it held the audience that included Diana Ross, George Hamilton, Barbara Davis, Barbara Sinatra, Stefanie Powers and Joan Collins with sister Jackie until the end.

What the evening relied heavily upon were clips from the 1960s “Laugh In.” And it was a wise decision. There’s still a freshness to the comedy, plus it offered cameos from the likes of Richard Nixon, Rev. Billy Graham, Truman Capote, Gore Vidal and Barry Goldwater.

Speakers paying tribute included Kirk Douglas, Arte Johnson (who made an unfortunate decision to talk about his own career rather than the honoree’s), Sarah Purcell and Fred Willard of the Schlatter-produced Real People, Jerry Weintraub and Bruce Vilanch, who said he and Schlatter had “both auditioned for the same role on Duck Dynasty.”
When Shirley MacLaine spoke after clips ran from early Schlatter-produced shows, the first thing she said was: “I wish it could be like that now.” Lily Tomlin, who started her career on Laugh In, said it was “the only audition that ever got me a job — and it was George who did it.”

After a strong song from Jo Anne Worley, King made a comment about Schlatter that might go down in a book on classic Larry King-isms: “There’s a little Hitler in him, but he’s a wonderful person.”

Musical director Glen Roven, who has worked with Schlatter for 25 years and stood in for David Foster, who was under the weather, said that after a music rehearsal went on too long, a frustrated Schlatter rushed on stage to remind him that, “The music is the shit between the jokes.” Late in the show, Tim Conway got arguably the biggest laugh of the night when he began his remarks by saying: “I’ve never had to go to the bathroom as bad as I have right now. I wish I’d worn darker pants.”

Suzanne de Passe and Berry Gordy spoke about Shlatter’s offer to come to Los Angeles and make the 1968 NBC special TCB with Diana Ross and the Supremes and the Temptations, which sparked the exit of Motown from Detroit. (After the show was over, Ross was asked how she felt seeing the old clips. “I was really skinny,” she said. “I loved that.”)
After Sidney Poitier received a standing ovation for being in the audience and Goldie Hawn spoke via video about getting her start on Laugh In, Schlatter came to the stage. He was brief in his remarks, calling the evening a “mosh pit of clips and memories” and how he hoped an evening like this would become an annual fundraiser for Pepperdine’s George Schlatter Comedy Collection housed in the university’s library.

He did not answer one question that hung over the evening: Why did a quintessentially Jewish guy like Schlatter go to a college affiliated with the Churches of Christ?