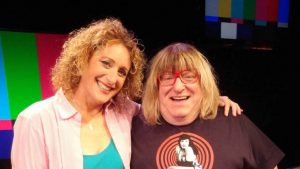 When you’re talking comedy greats today, Judy Gold is truly worthy of her last name. Whether it was as writer and producer of the Rosie O’Donnell show, starring in two acclaimed Off Broadway one-woman shows (“The Judy Show — My Life as a Sitcom” and “25 Questions for a Jewish Mother”) or just the nearly 25 years she has been doing standup, the comedian delivers a gold-medal performance at every turn.

On Jan. 27, Gold will be teaming with fellow NSFW (not safe for work) comedian Bruce Vilanch for a show at the Ridgefield Playhouse titled “Big and Small.” Gold spoke with us about her upcoming show and getting her start in standup.

Keith Loria: Preview a little of what we can expect from you on the night.

Judy Gold: I’ll be ranting and going off on how much I hate everyone, which seems to be the theme of my act now. It’s going to be a really fun night.

KL: How do you and Bruce complement each other on stage?

JG: I love doing this show. Bruce is like a joke machine. He has worked with everyone and he knows stuff about all of them. It’s really fun to hear about Hollywood from someone who has made other people look funny for so long. We are so different. He tells these incredible stories about Hollywood, and I’m just me. I think we really complement each other and are funny in different ways. We’ve known each other for years.

KL: With such different styles, why did you think the pairing would work?

JG: We’re both gay, both Jews and both large! We’re both from New Jersey and were both very close with our mothers. There’s just a kinship. We just had an immediate connection.

KL: How did you know that comedy was something you wanted to do with your life?

JG: I knew I would never be happy if I didn’t follow my dream. Yet, I come from the most conservative family when it comes to risk taking. My father was a tax attorney, my mother a secretary, my sister is in insurance and my brother is a CPA. To them, my dream was crazy.

KL: You came up through the comedy ranks alongside notable comics like Ray Romano and Wanda Sykes. What was it like back then?

JG: It’s like we were all in the same platoon. We share this bond that can never be broken. When I was on the road in the ’80s and early ’90s, we wrote all day and then we hung out all night. We were each other’s family and standup became so important to me.

KL: How has Donald Trump becoming president changed your act this past year?

JG: It is like the orange elephant in the room all the time. It’s on everyone’s mind all the time. I remember the days when I would watch Jeopardy! but now I have to have MSNBC on every night. It’s turned into a dangerous reality show. My relationships with some people have changed and my audiences have changed. He just brings out the worst of people.

KL: You host a successful blog — Kill Me Now with Judy Gold. What do you enjoy about that experience?

JG: I find people really interesting and I want to know what makes people tick and what makes them different. To be in this horrible show business, you have to be ill in some way because it’s such a crap shoot. I really love finding out the stuff they don’t normally talk about.