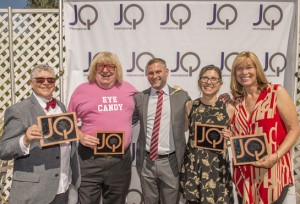 “After I came out, I identified strongly as a Jewish lesbian, but there weren’t many places that honored all of me,” Zacky said in a statement. “JQ has created an open and inclusive community of LGBT Jews and I’m so glad to be a part of that.”

Approximately 165 people turned out for the event.

JQ International describes itself as an inclusive community for LGBTQ Jews that raises awareness and acceptance of LGBTQ community members in the Jewish world.

“We create programs and services that foster a healthy fusion of LGBTQ and Jewish identity, which offer LGBTQ Jews, their friends, families, and loved ones the opportunity to connect with each other while fostering a strong sense of self,” the organization’s website indicates.