Buffalo News
Murphy bows out, Crystal steps up, but what if Oscar needs another host?
By Jeff Simon
November 11, 2011 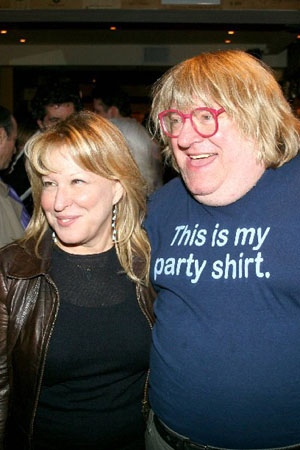 Eddie Murphy, as the world now knows, took a powder.

He is not going to host the Oscars after all. His â€œTower Heistâ€ director, Brett Ratner, was the fellow whoÂ¶d askedÂ him to do it in the first place when the Oscar powers-that- be originally asked Ratner, for their ownÂ reasons, to produce the show.

But then Ratner â€”said to be in life an overprivileged brat from an inept Judd Apatow movieâ€”started lipping off. AtÂ a news conference for â€œTower Heist,â€ he was innocently asked by someone in the vast army of Hollywood fawnersÂ and junketeers about how he rehearses his actors.

Dismissive public bigotry about homosexuals is no longer permissible for a producer of the highest-profileÂ entertainment event in the Western world. Frankly, I donÂ¶t think it ever was permissible. Even in the â€œletÂ¶s-breakevery-ruleâ€ late- 1960s and early Â¶70s, a producer saying something that dumb about one of the two tentpole
minority groups of Hollywood (the other, of course, would be Jews. See Neal GablerÂ¶s classic history â€œAn Empire ofÂ Their Ownâ€) would have notable difficulty finding people willing to work for him.

Nor was that RatnerÂ¶s only mistake. He went on Howard SternÂ¶s glands-on-parade satellite radio frat party andÂ discussed his sex life and the physical endowment he brings to its pursuit.

IÂ¶ll say this for Ratner: Any man who supports SternÂ¶s ongoing First Amendment assault on our current revival ofÂ the All- Too-Appropriate Â¶50s deserves some sympathy from the thinking classes, even if they donÂ¶t begin toÂ include Ratner himself.

Nevertheless, RatnerÂ¶s â€œIÂ¶m Way Out of My Depthâ€ openmic tour of all the wrong places got him yanked from theÂ Oscar gig. His appointed emcee, Murphy, merely did what a loyal friend should do and backed up his friend byÂ bowing out.

Leaving, of course, a big hole where an Oscar host ought to be.

Ricky Gervais, bless him, rushed in and offered himself, at reduced cost, as host for a Twoferâ€” the Oscars aQd theÂ Golden Globes, to which heÂ¶s already a committed fixture.

He wasnÂ¶t fast enough. Earlier, Billy Crystalâ€” who has reached the stage of life where his hair has attained thatÂ orangish- brown color, never found in nature, which only seems to exist among aging comedians in proximity toÂ West Coast functionaries of the dyerÂ¶s tradeâ€”had mentioned that he might want to give the Oscars another go.
The Academy and Crystal, 63, confirmed Thursday it would take him up on that offer.

Crystal tweeted that he is â€œdoing the Oscars so the young woman in the pharmacy will stop asking my name when I
pick up my prescriptions.â€11/11/11 Murphy bows out, Crystal steps up, but what if Oscar needs another host? – Jeff Simon – The BuffaloÂ«

But, considering that the Oscars, really, belong to us all, I think the time has come for all good people to have theirÂ own input for those coastal bigwigs whoÂ¶ve been fumbling the matter of Oscar hosts for years. Even though thisÂ yearÂ¶s Oscar host sweepstakes are settled again, for now at least, we all need to offer our own categories of
acceptability for Oscar show hosts, so that the boredom and cheesiness are minimized, and rare wit, hilarity andÂ entertainment are made a little less rare.

HereÂ¶s my list of possible Oscar hosts. By all means, send yours to the Motion Picture Academy, too.
The A-List (Oh, go ahead, o er them the gig. They couldnÂ¶t be worse than some have been very recently.) EddieÂ Murphy, still. Ricky Gervais. Oprah Winfrey. Billy Crystal. David Letterman. (No kidding. He was never as bad asÂ he thinks he was, and in his current snarling and dyspeptic incarnation, heÂ¶d be hilariously off-key.) Craig Ferguson.
Robert Downey Jr. Ellen DeGeneres. Robin Williams (no fair, though, setting too many rules for what heÂ¶s allowedÂ to say).

Tom Hanks (with lots of good writers). Julia Roberts (ditto). Bruce Vilanch (my Far Left Field suggestion. TheÂ woolly bearded Vilanch has been the chief Oscar gagster for Whoopi Goldberg and Billy Crystal but is, himself, oneÂ of the most â€œinappropriateâ€- looking men in all of public life, which is why producers, in a bit of â€œOh, what the hellâ€Â bravado, couldnÂ¶t do better than having Vilanch and Gervais as truly subversive co-hosts for an evening never toÂ be forgottenâ€” whether ecstatic hilarity or infamous calamity).