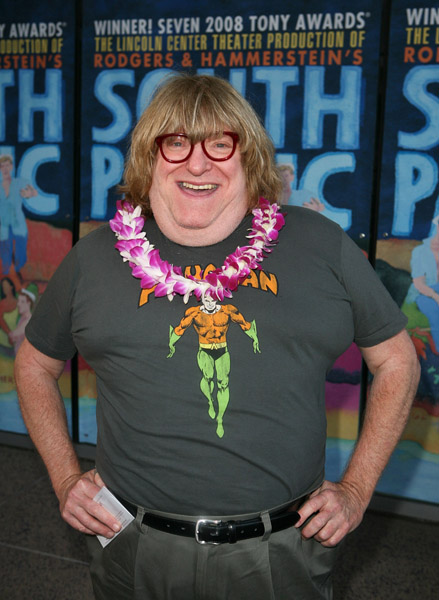 The opening night of Rodgers and Hammerstein’s “South Pacific” at the Ahmanson Theatre proved to be an enchanted evening for old-school musical buffs and teen and twentysomething “Glee” fans alike.

Wednesday’s celebrity guests included stars of the 1958 movie — Mitzi Gaynor, John Kerr and France Nuyen — as well as Shirley Jones and other members of the original Broadway production, which opened in 1949.

The most-anticipated arrival, however, was “Glee” heartthrob Matthew Morrison — Will Schuester, who leads the William McKinley High School show choir. Morrison originated the role of Lt. Joe Cable in the 2008 Lincoln Center Theater revival of “South Pacific,” which launched the current national tour.

Gleeks waving cellphone cameras rushed forward as soon as he appeared. Sporting a big grin and one of the orchid leis given to each VIP, Morrison signed autographs even as he was hustled inside when the overture began.

Culture Monster caught up with Gaynor, resplendent in blue sequins, at intermission. “This night is so emotional for me,” the film’s Nellie Forbush said, dabbing away tears. “The whole idea of having been a part of this is so beautiful.”