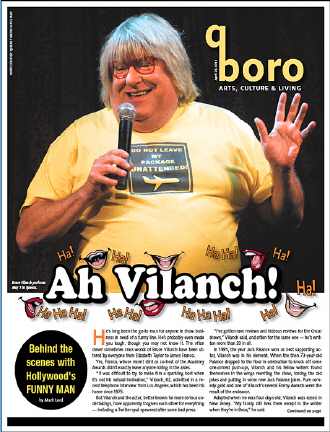 Heâ€™s long been the go-to man for anyone in show business in need of a funny line. Heâ€™s probably even made you laugh, though you may not know it. The often clever sometimes crass words of Bruce Vilanch have been uttered by everyone from Elizabeth Taylor to James Franco.
Yes, Franco, whose recent stint as co-host of the Academy Awards didnâ€™t exactly leave anyone rolling in the aisles.
â€œIt was difficult to try to make him a sparkling host when itâ€™s not his natural inclination,â€ Vilanch, 62, admitted in a recent telephone interview from Los Angeles, which has been his home since 1975.
But Vilanch and the actor, better known for more serious undertakings, have apparently forgiven each other for everything â€” including a Twitter spat spawned after some bad press.
â€œIâ€™ve gotten rave reviews and hideous reviews for the Oscar shows,â€ Vilanch said, and often for the same one â€” heâ€™s written more than 20 in all.
In 1991, the year Jack Palance won as best supporting actor, Vilanch was in his element. When the then 73-year-old Palance dropped to the floor in celebration to knock off some one-armed push-ups, Vilanch and his fellow writers found themselves in the wings rewriting the show, tossing the old jokes and putting in some new Jack Palance jokes. Pure comedy gold and one of Vilanchâ€™s several Emmy Awards were the result of the endeavor.
Adopted when he was four days old, Vilanch was raised in New Jersey. â€œMy family still lives there except in the winter when theyâ€™re in Boca,â€ he said.
â€œThere are always reasons to be back in New York. Astoria has become the chorus boy capital of the world. The N train is now called the â€˜Gypsy Rush,â€™â€ he joked.
He recalled that as a child he visited the Worldâ€™s Fair in Flushing Meadows Park, the site of his upcoming show. â€œI went for the Belgian waffles … A breakfast snack all day long,â€ the amply proportioned Vilanch said. On May 7, the comedian will bring his life story to the Queens Theatre in the Park stage for one night only.
Though he loves New York, the West Coast denizen has no plans to leave sunny Southern California, â€œI love the weather,â€ he said. If anyone doesnâ€™t like the lifestyle out there, he tells them, â€œPlease leave â€” more parking space for Bruce.â€
In his show, which he dubs â€œa sit-down comedy,â€ he will regale audiences with inside stories â€œabout the crazy people who are in show business.â€
His opening act, the Bev Leslies, are a soulful band who cover a wide range of music. He met them thanks to his ongoing association with Bette Midler.
â€œIâ€™ve worked with her for 40 years,â€ he said. â€œAnd sheâ€™s only 32.â€
Early in his career, Vilanch focused primarily on writing, a discipline he described as â€œvery private. You have to set a schedule for yourself. When Iâ€™m writing what I like, I get into the zone. When I sit down and focus, it comes naturally. Is it because panic is the mother of invention?â€
Since appearing on the revised edition of televisionâ€™s popular game show â€œHollywood Squaresâ€ in the 1990s, heâ€™s added more frequent gigs to his schedule.â€œYou get instant gratification when youâ€™re performing,â€ he said.
He described his Broadway debut in 2005 as Edna Turnblad, one of the stars of the musical â€œHairspray,â€ as a career highlight, along with â€œwatching Bette Midler ascendâ€ and writing the Oscars.
Vilanch recalled watching the Oscars as a child in a bathrobe, knowing he was destined for a career in show business. â€œFrom the time I was a little kid, I was totally struck,â€ he said. Luckily, he had a supportive mother who encouraged everything he did. â€œShe has great timing. I imitate her a lot,â€ he said.
â€œI once got her a part as a dead body on â€˜Law and Order,â€™ but she declined because it cost too much to join the union.â€
Vilanch is known for sporting tight fitting T-shirts bearing slogans replete with double entendres, a practice that began because â€œwhen you have a body like this, you have to show it off.â€ In truth, he did it originally as an act of rebelliousness against his fastidious mother, but soon found the style suited his career.
What question, if any, does he wish he would be asked? Ever topical, the openly gay Vilanch quipped, â€œâ€˜Are rumors about you and Prince William true?â€™ But why would they ask that?â€

Bruce Vilanch
When: May 7, 8 p.m.
Where: Queens Theatre in the Park, Flushing Meadows Park
Tickets: $37; $35 for seniors; $22 for students.
Visit queenstheatre.org