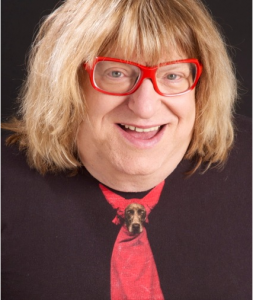 Bruce Vilanch would be the first to admit he’s had a strange career. With that in mind, we decided to look over his Wikipedia page with Vilanch himself to see if we could make any sense of it. “A lot of the stuff on here is wrong,” Vilanch said from his home in L.A., where he’s caring for a sick pug (“It’s a pug kind of town—there’s no air to breath anyway”). “I’m not 64, in fact I’m 65, and I’m collecting Obamacare like crazy.” The Hairspray star, Hollywood Square, and Academy Awards head writer also bills himself as Lindsay Lohan‘s sobriety coach and the latest success on Christian Mingle (“just got set up with a guy who used to be Pope!”). Vilanch regaled us with the following thoughts and anecdotes “from behind, before, and squatting over the footlights.”

This Wikipedia entry says you have Hitchcock’s hair—what?
No no, not hair: My wobbles, I have Hitchcock’s wobbles, his chins. He was pretty much hairless in the ’50s when he was on television every week. It’s more that I have his profile. I’ve got more chins than a San Francisco phonebook.

What can we expect at the Nikko on Thursday night?
I’ll be doing stories about my dark career in show business, writing 23 Academy Award shows, Hollywood Squares, et cetera. There won’t be any Sondheim, that I promise.

What was it like, in your first acting role, to work with Diana Ross?
Bizarre, because I thought I was rehearsing with her stand in, this skinny kid, and then she would come out of the trailer with the eyelashes and the wig, and glamour, glamour, glamour. I was like oh my, that’s Diana Ross. I told her this, and she told me yes, it’s all done with mirrors.

When you appeared on RuPaul‘s Drag Race 3 dressed as Santa, what were some of the items contestants asked for when they sat on your lap?
Big ticket items. And hey, I also worked with RuPaul back in his “Sashay! Shantay!” days, before Drag Race, when he had his talk show on VH1. And, there may be more RuPaul in my future.

Fine, tell us about the Oscars already!
Well, I’ve been writing since 1989, and it’s the greatest show on earth, isn’t it? It’s like the Superbowl— and some years you fumble. But it’s the kind of show that tries to reinvent itself every year, because it has to say something every year. They take it dead seriously, the Academy. At the core of it is the idea of serious people in a serious profession, and in it, everybody is equal to everybody else, the guy who does sound as well as the best actor: everyone has to be treated with equal reverence. So of course, I write jokes. One of my favorite moments was when Whoopi [Goldberg] was hosting the show, and two people had been nominated for playing Queen Elizabeth, and Whoopi came out in white face and said “I’m the African Queen!” Only a Hollywood crowd really gets that one.

You’re responsible for the Star Wars Holiday Special, right?
Right, and George Lucas won’t even speak of it, he’s disowned it. I don’t think there’ll be another one of those.

You’ve done lots of charity work—what makes you most proud?
All the AIDS work I’ve done, especially at the very beginning, because it was something we had to do. When AIDS hit, lots of people banded together to take care of each other and do what the government wasn’t doing. When you grow up Jewish, as I have, you learn that everybody hates you, no one’s going to help you, and you have to take care of yourself. That’s a great maxim to the gay community and we took it to heart, we took care of our own. I would trade off other disease fundraisers, raising for other causes that would raise for ours, and that’s how I learned all the major diseases and got into “big charity.” As I’m fond of saying, though, if the Holocaust led to the creation of Israel, then maybe AIDS has led us to where we are now.

Vilanch performs tomorrow (Thursday, 7/18) at 8pm at Feinstein’s at the Nikko.