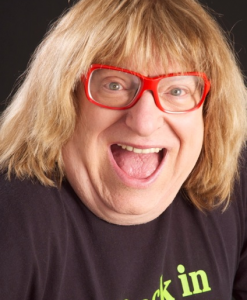 It’s hard to believe there isn’t a metaphor lying around under “Rubble” — a comedy about a TV writer stuck in a pile of debris after an LA earthquake. After all, it’s by TV writer Mike Reiss and stars TV writer Bruce Vilanch.

But Reiss — a longtime mainstay on “The Simpsons” and the creator of “The Critic” and “Queer Duck” — denies any hint of an agenda.

“I just wanted to write about someone trapped in rubble,” he says. “I don’t want people to think it’s autobiography. Even for New York theater, that would be self-indulgent. It’s not my life — it’s my worst nightmare.”

As for Vilanch, the show’s star, he seems less startled by the subject than by being in the New York International Fringe Festival, where the show premieres Saturday.

“I didn’t realize how exotic the Fringe is,” says Vilanch, who’s as famous for his red glasses as he is for writing gags for the Oscars. “First of all, you learn 7,000 pages of dialogue for five performances spread over three weeks. This is like doing ‘Rigoletto’! It’s insane! And you have half the rehearsal time because everybody is working in between their other stuff.”

Reiss was moonlighting, too. First there’s “The Simpsons”: He’s been there on and off — more on than off — since Day 1, when he was a staff writer. He became showrunner for Seasons 3 and 4, which is when the series truly gelled around such classic episodes as “A Streetcar Named Marge” and “Krusty Gets Canceled.”

Lately, though, the 53-year-old’s been scaling back.

“I go to Los Angeles on Wednesday to work on ‘The Simpsons,’ and I fly the red-eye back on Thursday,” says Reiss, who lives in Midtown. “A great week is a week where I spend less than 24 hours in LA.”

And then there’s his career as a prolific kid-lit author — a line of work that somehow led to his stage career.

A few years ago, Reiss, married and childless, was lecturing about his books at the University of Connecticut when someone suggested he write a play about Connecticut, “because it hadn’t been done before.”

“It was so easy because it was untouched territory,” says Reiss, who grew up there. “I talked about the state and its personality. And its lack of personality.”

“I’m Connecticut” received positive reviews. Emboldened, Reiss wrote “Rubble” and sent it out to a whole bunch of people.

“Nobody said ‘I hate it,’ ” he reveals. “They just didn’t respond at all. Except this one guy named James Valletti, who’s a friend of a friend of my brother-in-law’s dentist. I sent it to him, that’s how desperate I was. But he loved the play and made it his life mission to stage it.”

Not only did Valletti get the show into the Fringe, he also roped in Vilanch, a choice Reiss happilyendorsed.

“I thought we’d get a free rewrite out of him but he hasn’t changed the lines!” Reiss says. “Yet he finds all this comedy where there was no comedy. He reminds me of Jackie Gleason — he’s so physically funny, with that giant expressive face.”

Vilanch, 64, is no stranger to acting. He performed in the off-Broadway solo “Bruce Vilanch: Almost Famous” and played Edna Turnblad in “Hairspray” on the road and on Broadway. Even that didn’t quite prepare him for the specific challenge of “Rubble.”

“Bette Midler sat there for 90 minutes in her Broadway show, but I told her that she at least had a couch and pillows to fluff,” he notes. “I sit, too, but surrounded by heaps of boxes. I kind of resemble a barge floating to Staten Island.”

One thought on “Inside The “Rubble””