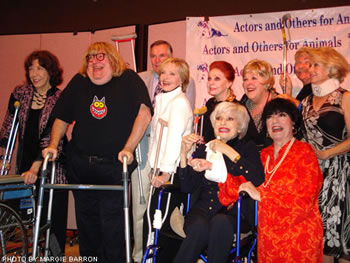 The passionate celebrity pet-lovers organization, Actors & Others for Animals held their annual Celebration of Caring gala. The event put the spotlight on the extraordinary career of Broadway legend and entertainment icon Carol Channing.

Lots of familiar faces from Hollywood classics showed up to honored Channing. As president of Actors & Others, Laugh-In funny lady JoAnne Worley was the emcee of the lively event and kidded about being how hard it was to be Carolâ€™s â€œStand Byâ€ when Hello Dolly opened on Broadway many decades ago.

â€œI never got to go on! I checked in every night, but Carol never missed a show,â€ Worley reported. She also explained the difference between a â€œStand Byâ€ and an â€œUnderstudy.â€ â€œItâ€™s about five hundred dollars a week,â€ Worley laughed.

The Actors & Others event was Channingâ€™s first appearance since she fell and broke her leg. But the show went on with Carol in a wheelchair. In a show of solidarity, everyone on the celebrity dais paraded into the Universal Hilton ballroom pretending to be injured, hobbling on crutches, a walker, sporting a neck brace, etc.

The best line from the event was directed at Tippi Hedren, who has the Shambala Preserve dedicated to caring for large cats. Bruce Vilanch informed her that he had a â€œcougar in need of rehabilitation– itâ€™s Florence.â€ Florence Henderson roared at the well-timed joke.

Actors & Others for Animals was founded in 1971 to promote the humane treatment of animals and to improve their quality of life, â€œwhile fostering an awareness and appreciation of the importance they have in our lives,â€ explained JoAnne Worley.

Then as now, celebrity members volunteer to use their media appeal to help educate and shape public awareness about animals in crisis. To learn more visit www.actorsandothers.com.