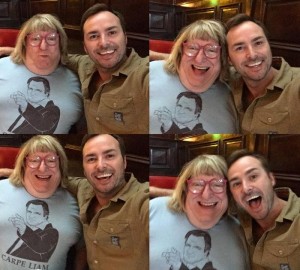 Upon meeting a legendary Hollywood personality it’s only fitting that we meet in a legendary Hollywood establishment. Musso and Frank Grill on Hollywood Boulevard. Since 1919, stars from Rudolph Valentino and Charlie Chaplin to Marilyn Monroe and Lauren Bacall have been sipping martinis in its old worn leather booths or throwing back scotch in its infamous back room – a watering hole for some of the finest writers including F. Scott Fitzgerald, William Faulkner, and Raymond Chandler. I arrive and Bruce Vilanch greets me as ‘Nick Hardcore’.

A regular here, Vilanch is instantly recognisable wearing his signature bright coloured glasses and a t-shirt with a cartoon image of Liam Neeson and the slogan ‘Carpe Liam’.

He has had a long and colorful history in show business and Hollywood. A six time Emmy winner, Bruce has also won a number of awards for his support of LGBTQI and HIV/AIDS charities.

He has written for the Oscars for 23 years as well as the Tonys, Emmys and Grammys. He has contributed to many Broadway shows including Peter Allen’s first, Up in One, and Priscilla Queen of the Desert the Musical. He is currently penning a new show based on the music of Petula Clark. He has been a long time gag writer for Bette Midler, Billy Crystal and Whoopi Goldberg, as well as having worked with the late and great Elizabeth Taylor, Robin Williams and Joan Rivers. Whether he set out to be or not, Bruce Vilanch has been a pioneering gay voice in the entertainment business.

A New Jersey native, Vilanch spent five years in Chicago where he wrote for the Chicago Tribune and occasionally did stand-up comedy. There he met Bette Midler in the mid ’70s. He thought that she was “funny and should talk more on stage” so he wrote some new material for the rising star and they’ve been working together ever since.

When he relocated to Los Angeles, his first gig was on a late night show called Midnight Special in 1978. There were many people who had appeared on TV before Bruce Vilanch who were gay of course, as well as gay characters in shows like All in the Family and even Australia’s Number 96, but you would be hard pressed to find an openly gay man who discussed his experiences on air before Vilanch did.

“I was completely open from the word go. It was very novel because it was one o’clock in the morning. But being openly gay on TV hadn’t become my schtick yet. I just never denied anything.”

“I was completely open from the word go. It was very novel but because it was one o’clock in the morning. But being openly gay on TV hadn’t become my schtick yet. I just never denied anything.”

Considering the cultural climate at the time, it was a bold move. In 1976 Elton John announced that he was bisexual in Rolling Stone and he was immediately removed from the playlists of many the major radio stations. “Those regional stations were where you broke records. So if some minister comes in to the local radio station in Kansas city and says you can’t play that cock sucker Elton John’s records anymore – you’d better believe he’s getting dropped off the playlist! Elton’s career was pretty much over there for a while – you can understand why it might have just been easier to say nothing.”

“So there was a lot at stake. Although no one ever told me that I couldn’t be out on TV. What they all did say was that I need to be sure. ‘Is this what you want to be known as? Because there are consequences – there will be no working with children and no big money endorsement deals and there certainly won’t be leading man parts because you can’t kiss the girl.’ But I got to be myself.”

Vilanch’s mainstream profile rocketed when he became a regular panelist on the long-running game show ‘Hollywood Squares’ from 1998 – 2002, with his old friend and client Whoopi Goldberg. He says that this was the only time that he ever came under pressure about his sexuality on television.

“And that was only because I was graphic. I had to really fight to get some of my lines across,” he explained.

Producers would insist that there were other ways to get the laughs, and that Bruce should ‘go easy on the gay’.

“But this was coming from the same people who would say to Whoopi, ‘Go easy on the black. You don’t have to be so street’. The notes were always back-to-back. They never said to Gilbert [Gottfried] not to be so Jewish.”

At this time, Vilanch was becoming somewhat of a gay icon and it put him in a position to be able to counsel other LGBTQI people in the media. “I tell other famous people who come out that you really have no idea the affect you are having on young people who are unsure or conflicted – it gives them hope.”

He recalls a young man telling him that he used to watch Hollywood Squares with his grandmother and would be inspired, thinking, “Look at him – he’s so unafraid.”

Vilanch cites Ellen DeGeneres as another great example of that fearlessness in spite of the potential consequences. “When Ellen came out on her sitcom she was very courageous, but she was very smart. She said once she came out that they should cancel because now they would have to go in to storylines that the audience probably won’t like.

“The network thought the numbers were great, but sure enough the southern states cancelled the show and because she wasn’t being seen on the same amount of stations the numbers dropped and the show got cancelled. It took a while for Ellen to really come back from that.”

“I tell other famous people who come out that you really have no idea the affect you are having on young people who are unsure or conflicted – it gives them hope.”

But the landscape was starting to change, albeit, slowly. Will and Grace in particular became a huge hit. According to GLAAD, (formerly the Gay & Lesbian Alliance Against Defamation), a US non-governmental media monitoring organisation, by the time the show had aired its final season in 2006 almost 2 per cent of regular characters on prime time broadcast TV were gay. While it was certainly not a fair representation of the population, it was a sign of positive change.

Now in 2016 more than 4 per cent of regular characters on prime time are identified as LGBTQI. Guest characters and LGBTQI personalities in non-scripted television are also starting to be represented in more significant numbers. In the last year alone the number of regular LGBTQI characters counted on cable increased from 64 to 84, while recurring characters increased from 41 to 58. In 2015 for the first time, GLAAD counted LGBTQI characters on original series that premiered on Amazon, Hulu, and Netflix and found 43 series regulars and 16 recurring queer characters across 23 series.

In 2016, Vilanch says that it’s much more difficult to say if someone’s sexuality really affects their media career as much as it did in previous decades, as each case is individual. “There’s still no leading man action hero who has come out and said he’s gay. We’ve had a few pro sports people but no huge major figures. When that happens maybe things will really change because we’ll finally have an example where the audience will have to believe whether say, James Bond is still James Bond when the actor playing him is openly gay. Can they buy him shagging Pussy Galore when they know he wants Balls a Plenty? That hasn’t been demonstrated yet.

“We have people like Neil Patrick Harris, Lance Bass and Melissa Etheridge and Portia de Rossi, who are big stars doing great things – but it’s unlikely you’ll see them as action heroes.”

At this point Vilanch accidentally spills come creamy salad dressing right on Liam Neeson’s cartoon face on his t-shirt. Make of that what you will.

As talent, humour and fame can be powerful aphrodisiacs for some people, I finally ask Vilanch if he thinks that being on TV has increased his sex appeal.

“I was only ever a lust object for creepy people– chubby chasers,” he replies.

When I insist that humor is the sexiest quality in any person, he cuts to the chase, “I would love to say it’s the case… but I find that they’ll laugh with you, but they’ll go home and fuck someone else. But humour sustains in a way that physical beauty doesn’t… at least I still have my card to play. ‘Snap!’”