The Times Of Israel
Hanukkah gets a kitschy ‘Nutcracker’ treatment for the holiday’s last night
By MATT LEBOVIC
18 December 2017, 10:25 pm 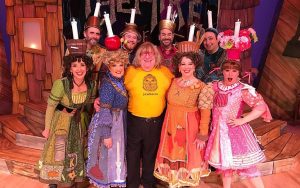 The cast of “The MeshugaNutcracker! The Chanukah Musical,” including guest star Bruce Vilance (center), in 2016. A film version of the musical comedy will be screened on Dec. 19, 2017 (Courtesy: Guggenheim Entertainment)

BOSTON — Just in time to pierce the gloom of winter, a Hanukkah musical comedy based on “The Nutcracker” score will be screened Tuesday night at 350 movie theaters across America.

“The MeshugaNutcracker! The Chanukah Musical” is a kid-friendly, two-hour celebration of Judaism’s Festival of Lights. Billed as “the music of Tchaikovsky with klezmer-Broadway fusion styling,” the show features eight tales based on Jewish resilience throughout history, from Judah Maccabee until modern times. Along the way, 20 original songs and a lot of Yiddish slang make for a uniquely schmaltzy experience.

Produced by Guggenheim Entertainment, the musical was first workshopped in Palo Alto, California, in 2003. Since then, most performances have taken place on the West Coast, some of them sponsored by Jewish communities. At the end of 2016, the show was filmed in front of a Los Angeles audience to create a polished version for the silver screen.

Essentially adding lyrics about Hanukkah to tunes from “The Nutcracker Suite,” the film includes a guest spot by colorful Emmy winner Bruce Vilanch. As the “shamash” helper candle, Vilanch caps off the show’s “Fools of Chelm” theme, wherein an ensemble from Jewish folklore’s most hapless town sing their way through Hanukkah tales.

The cast of ‘The MeshugaNutcracker! The Chanukah Musical’ performs in the 20-song production (Courtesy: Guggenheim Entertainment)

The Hanukkah musical was born out of its creators’ frustration with a lack of family events tied to the Festival of Lights, whiles “A Christmas Carol” and “The Nutcracker” relate to Christmas under the banner of the most wonderful time of the year.

According to co-producer and lyricist Shannon Guggenheim, “The MeshugaNutcracker!” is about optimism in the face of oppression.

“No matter what religion you are, no matter what you celebrate this time of year — it’s about finding the light in people, finding light in yourself, letting the holidays truly illuminate everything around you,” said Guggenheim. “That really is what we’re trying to do: give families something bright and fun but also poignant and meaningful to celebrate this time of year.”

In keeping with the context of the show’s birth, Act One opens with Christmas music in the air. While waiting for their auditions, the quirky performing “Fools of Chelm” recount past star-turns in “My Fair Zadie” and “The Wizard of Oy.” In the evening’s first “Nutcracker”-infused song, a “Dance of the Chanukiah” is performed to the tune of “Waltz of the Flowers,” one of the ballet’s top three songs.

The cast of ‘The MeshugaNutcracker! The Chanukah Musical’ performs in the 20-song production (Courtesy: Guggenheim Entertainment

As with the “Nutcracker,” the focus in Chelm shifts to children in search of broken or missing toys. Instead of a nutcracker that comes to life in imperial Russia, in Chelm there’s a lost “special menorah” that takes center stage. As children search for the elusive ritual object, life lessons about sharing and being satisfied with what you have are cut with slapstick, including the requisite rubber chicken.

Among the productions’s songs, an audience favorite has been “Little Matchstick,” about a girl afraid of the dark. Her father tries to comfort her by speaking of light and sharing the glow with others. Unbeknownst to the girl huddled inside a dark, cramped train car, she and her family will soon arrive at a Nazi death camp. Another moment in Jewish history, just a few years later, is depicted in “Judah’s Gift,” about the first bittersweet Hanukkah in the new State of Israel.

The cast of ‘The MeshugaNutcracker! The Chanukah Musical’ performs in the 20-song production (Courtesy: Guggenheim Entertainment

Like the second act of “The Nutcracker,” much of “The MeshugaNutcracker!” is divertissement, not intended for plot dissection but to captivate audiences. If dancing dreidels and jelly doughnuts are too childish for you, there’s the novelty of seeing Jewish history enacted by top-caliber vocalists wearing baskets, flower pots, and fruit on their keppys.

“It’s a show that’s really never been done before,” said Susan Gundunas, a soprano in the ensemble cast. “Not just because there’s finally a big, beautiful show about Hanukkah in the same way there are big, beautiful shows celebrating Christmas, but also because the cast is singing an amazing challenging score that was originally intended for musical instruments.

“We get to sing the piccolo line and clarinet line of melodies you’ve had in your head forever but that have been wordless for hundreds of years,” said the performer.