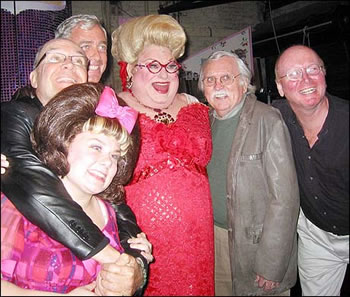 Comedian and writer Bruce Vilanch has stepped into the high heels of Edna Turnblad in the Broadway production of Hairspray.Vilanch joined the New York company Oct. 5 after touring the country as Edna for nearly a year. Vilanch is reunited onstage with Carly Jibson, who joined the Broadway troupe over the summer after her run on tour.

A celebration took place backstage at the Neil Simon Theatre just after the curtain came down on Vilanch’s opening night. There to express their congratulations were director Jack O’Brien, Jibson, lyricist Scott Wittman, and writers Thomas Meehan and Mark O’Donnell.