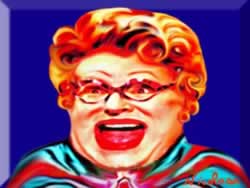 Bruce, Be a Lady Tonight
Bruce Vilanch does Hairspray at the Fox
BY DENNIS BROWN

The first motion picture Bruce Vilanch ever saw was the 1952 circus epic The Greatest Show on Earth. That was the day a four-year-old in Paterson, New Jersey, fell in love with movies.

“My mother said I learned how to read by reading the movie ads,” Vilanch says. “I would pick [former St. Louisan] Virginia Mayo’s name out of the ads. I’d say, ‘Mayo, Mayo,’ and my family didn’t know if I was referring to Virginia Mayo or mayonnaise.”

This week Vilanch arrives in Virginia Hold-the-Mayo’s hometown as the “name” star in the national company of the Tony Award-winning Broadway musical Hairspray. Although he’s having a ball dressing up in drag eight times a week, this particular week he’s been missing his old gig. For the past fifteen years, Vilanch was a comedy writer for that other greatest show on earth, the annual Academy Awards broadcast. Old habits die hard, so the minute this year’s nominations were announced, Vilanch’s one-line mind clicked into gear.

“It’s not that I came up with specific jokes,” he explains. “I think in terms of areas. When the girl from Whale Rider was nominated, I thought, oh, to be in the room with the other writers and to be able to throw out jokes about riding whales. I know there’s a Marlon Brando joke in there somewhere.”

The one thing Vilanch didn’t miss was the pressure. “By the time we’d get to 24 hours before airtime,” he says, “I’d be running around like a crazy person. By that point, most of the pressure has to do with keeping what you’re going to do a secret, because the press is all over you. Every reporter wants to be the one who’s gonna tell the audience what they’re going to see before they see it.”

Hairspray is adapted from the 1988 John Waters movie about how a national TV dance show (think American Bandstand) gets integrated in 1962 Baltimore. “The show is smart with heart,” Vilanch says. “It’s sentimental, but it still has a lot of edge, because its satire is full-blown from the head of John Waters.”

As Edna Turnblad, the drag role portrayed by Divine in the film and by Harvey Fierstein on Broadway, Vilanch has to sing several songs. “I have to sing at least as low as Harvey, so for coaching I went to Bea Arthur,” says Vilanch, who’s never able to resist a good one-liner. “I find it funny to be around the kids in the show who really are singers. When they’re backstage running scales, there’s so much screeching it sounds like an aviary. As for me, some of my singing sounds like a foghorn. The rest of it resembles Ethel Merman with heavy congestion.”