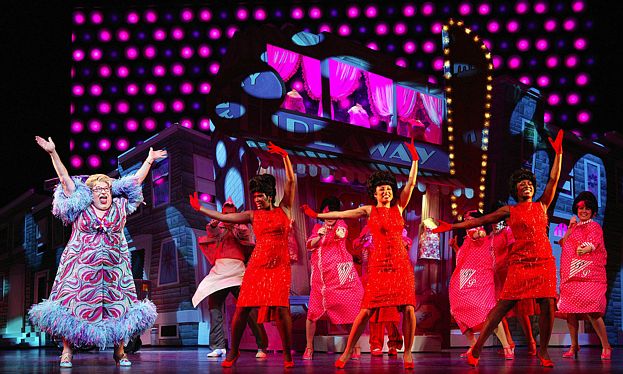 When power-puff performer Bruce Vilanch snagged the meaty role of Edna Turnblad, the commanding matriarch of the Broadway blockbuster “Hairspray,” he knew he had big bouffants to fill.

The role was created by cult-movie star Divine, who died shortly after completing the 1988 John Waters film. Harvey Fierstein originated the part on Broadway, bowling over audiences with his bullfrog voice. (He won a Tony for for the role in 2003, one of the musical’s eight wins).

But Vilanch, who has a devoted following, was confident that he was up to the task. After all, he had spent a lifetime on different sides of a joke. As a gag writer, he has put humorous words in the mouths of Billy Crystal, Robin Williams, Bette Midler, Whoopi Goldberg, Lily Tomlin and other Hollywood luminaries.

He also has written comedy for variety and awards shows, including the Emmys, the Tonys and the Oscars, and is the subject of the 1999 tribute film “Get Bruce!”, which featured cameos by Roseanne and Carol Burnett. He has even worked as an entertainment critic.

“Hairspray,” which opens Tuesday at the Historic Orpheum Theatre in Minneapolis, is about overcoming ignorance and biases in the crucible of 1960s Baltimore. It revolves around tubby teen Tracy Turnblad, who wants to be included in the “in” thing of the era: a TV dance show. When she gets on the program, she must vanquish the show’s reigning princess, win the heart of a heartthrob and help integrate the all-white show.

Vilanch is enjoying every minute of his role as Tracy’s mother. “Harvey is irreplaceable, but we’re having a scream,” he said.

Hedy Weiss of the Chicago Sun-Times wrote that Vilanch “has the shape of a Christmas ham, with upper arms to match,” and that he moved “across the stage like a lightweight tank draped in Pucci prints.”

And the company adores Vilanch. “Bruce plays my mother onstage and pretty much offstage, too,” said Carly Jibson, 19, who plays Tracy. “He’s such a nurturer, a mother hen. He’s never stressed, never impatient. For me, on my first professional tour, this is the job of a lifetime, and Bruce makes it so.”

A native of Paterson, N.J., Vilanch has been performing since he was a child, doing summer stock and musicals. But after attending Ohio State University, he landed not on stage but in a newsroom, getting a job as a reviewer of “dinner entertainment” at a Chicago Tribune subsidiary. When it folded, he was hired by the parent paper.

“There’s a delicious irony of starting out your career as a critic at the Tribune, then to be reviewed by them,” Vilanch said by phone from Chicago. “I know how seriously I’m supposed to take the review.” He laughed.

It’s hard to imagine the flamboyant Vilanch in any newsroom, let alone that of the straitlaced Chicago Tribune.

“Remember, this was the early to mid-1970s, and Stonewall had already happened,” he said. “There were a few other screaming queens there. Besides, I wasn’t a swishy, ‘Queer Eye’ gay, but everyone knew that I was fabulous.”

While writing reviews, Vilanch also was writing jokes and performing at late-night cabarets. “Everyone had a sideline then,” he said. “The Watergate ethics thing hadn’t yet seeped in.”

He met Midler, for example, after he reviewed her performance in Chicago. “She called me up and said that my column was funny,” he recalled. “I told her that she was funny and she needed to talk more. She asked me if I had any lines.”

As if on cue, Vilanch recalled their first joke — a reference to Chicago, known for its architecture, its brawn and then-mayor Richard (Dick) Daley.

“So we thought, what if we renamed the major buildings in the city — the Standard Oil building was called Big Stan, the John Hancock Building we called Big John. Good thing the mayor doesn’t have a building named after him.

Vilanch left the Tribune in 1975. “Bette’s dresser started the Manhattan Transfer,” he recalled. “They got a show, and we put their act together. I was itching to move, and I couldn’t go back to New York because I’d grown up there. So I went Hollywood the best way there is — with a job and an agent.”

Vilanch said there were many opportunities for people who could write. “Those were the days, pre-cable, when you had all these variety shows — Carol Burnett one night, Dean Martin the next,” he said. “Cable killed all that, and that’s why I turned to other things.”

As AIDS ravaged the gay and performing-arts communities, Vilanch went through a dark period personally and professionally. “When you have to bury three or four friends a month, that’s tough,” he said.

His professional nadir came in 1978, when he wrote a musical called “Platinum.” The show ran for 33 performances. “When you have a bomb that large, you think that you will never work again,” he said. “So I took the next thing that came along — ‘Can’t Stop the Music.’ ” The show about the Village People also bombed.

He emerged as a performer in his own right, first at benefits to raise money for various causes, then on TV. In the 1990s he had a four-year run on “Hollywood Squares” (his square was next to that of Goldberg, another client).

“When you’re on TV a lot, people see you and think they know you,” he said. “I hope I have a few secrets left.”

Vilanch said that being a star of a Broadway behemoth was not something he longed for; he was most comfortable behind the scenes.

“I’ve always been a backstage kind of guy,” he said, pausing, then bursting into his voluble laugh. “If I had wanted to be a big star, I would’ve done it at 26, not 56.”

But he had something of an inside track for the role: He worked with “Hairspray” lyricist Scott Wittman 30 years ago. “He had been Bette’s musical director, and when I did my first one-man show, guess who wrote the opening number for my act?” Vilanch said.

And how does one step into a role so well-established in the popular imagination? “Well, you adjust the script to suit the actor,” he said. “There were lines in the show that could only be done by Harvey — that were customized for him. We had to rewrite those.”

Vilanch pondered the question some more. “It’s like a gift — this role, this life,” said. “It’s only on reflection, late in the night with a glass of Courvoisier, you might say, ‘Gosh, this is weird. This is amazing.’ “