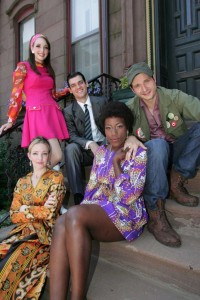 For the young Broadway actress Ephie Aardema, the new musical, “Sign of the Times,” at Goodspeed’s Terris Theatre, goes far beyond nostalgia.

Set in the mid-1960s, the story follows 20-something Cindy, played by Aardema, from her Ohio hometown to Manhattan to explore her dream of becoming a professional photographer. In the process, she comes to understand the importance of “friendship, love and discovering one’s sense of self.”

Through all her experiences, Cindy’s soundtrack for life will be the pop music that indeed captured this period of time — songs made famous by the likes of Petula “Downtown” Clark, Nancy “These Boots are Made for Walking” Sinatra and Dusty “I Only Want to Be with You” Springfield. Songs made popular by Elvis Presley, Glenn Yarbrough and Janis Ian are among the many others featured.

Baby boomers, those born soon after World War II, will be able to tap their toes to the music that was a favorite of the time. And nostalgia is good, says Aardema, who celebrated her 25th birthday, while in rehearsals.

But younger audiences, too, will relate to this musical since many of the issues of 50 years ago are relevant today, said the Orlando, Fla., native.

“History repeats itself,” she noted. “There are so many parallels to today … so many issues that we are still struggling with: civil rights, feminism” and war. In the 1960s it was Vietnam, today it’s the Mideast and world-wide terrorism, she added. “Plus, the musical has sharp dialog and a great sense of humor” that will appeal to a broad range of theater-goers.

“I don’t want to give away the ending … but hers is a journey of independence, as she asks: ‘Who am I?’ She’s a pretty strong individual who always speaks her mind. Even when she arrives in New York, she’s naive, but she still speaks her mind. I love that about her,” Aardema said.

Goodspeed, which is based in East Haddam, operates the Terris Theatre in Chester as a “test kitchen” of sorts for the development of new musicals. It is hoped that this particular show will go on to have a long life on Broadway, off-Broadway, on a national tour or in regional theater. For this reason, dialog and music can be tweaked or changed at every performance.

That said, the production features songs predominantly by Clark (an English singer, whose career spans about seven decades): “My Love,” “A Sign of the Times,” “Colour My World,” “I Know a Place,” “The In Crowd” and “Don’t Sleep in the Subway” among them.

Aardema, who appeared in the Broadway production of “The Bridges of Madison County” and Goodspeed’s “Snapshots,” will co-star with Robert Lenzi, Nick Bailey, Bryan Fenkart, Alet Taylor and Crystal Lucas-Perry.

Director is Gabriel Barre, who says the production will take audiences on a “fun-filled ride through the nightclubs, subways, cramped apartments and penthouses of 1960s New York.” Book is by Bruce Vilanch, with the story created by Richard Robin. Choreographer is JoAnn M. Hunter.

Aardema, who studied at Circle in the Square Theatre School in New York, said she gets the most pleasure from dancing in the show.

“JoAnn is an amazing choreographer and there are a couple of magical numbers in this. I started out as a dancer (in elementary school), so dance is a huge source of joy for me … even watching (others dance) is really cool.”

Aardema said the first community musical for which she auditioned was “Annie” at age 9. She also simultaneously signed up as a backstage volunteer — because she was certain that she wouldn’t even get a bit part in the show.

Apparently, she had no idea she was a natural on stage; others, however, did. She won the lead “and I’ve never looked back.”