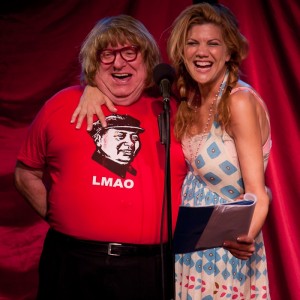 When a festival has been around as long as the N.C. Gay and Lesbian Film Festival has, it doesn’t have to hunt down film selections anymore. No, sir – the films come to it.

And it appears that a lot of films are coming to this year’s festival, which runs next week at the Carolina Theatre in Durham. More than 300 films were submitted, and 73 were chosen.

“We are celebrating a milestone,” said Carolina Theatre senior director Jim Carl, referring to the festival’s 15th year. “We’re now one of the longest-running LGBT fests in the country.”

Carl said the festival got nearly everything it requested this year in the 21 features and 52 shorts lined up for the four-day fest. The festival wanted “Howl,” a soon-to-be-released film on gay Beat poet Allen Ginsberg (played by James Franco) and his most popular, most controversial poem, and got it on the first try.

“[The distributor] had heard of us,” Carl said. “They knew who we were. They were waiting for us to call them. They were very happy to be in the festival. So we said, ‘Great.'”

As always, the festival will cover a wide selection of films made for, by and/or about the gay, lesbian, bisexual and transgender crowd.

There will be stateside comedies for the guys (“BearCity,” “Violet Tendencies”), European dramas for the girls (“Out of the Blue,” “Purple Sea”) and documentaries on LGBT culture among the elderly (“Edie and Thea: A Very Long Engagement,” “Gen Silent”).

There appears to be a theme quietly running throughout the films this year: parents of gay people, just trying to understand. A short-film block called “Mother Nature Does the Rest” deals with the relationship between mothers and their gay children. Said Carl, “It’s not about coming out [this year]. It’s not about horror movies. It’s about parenting and motherhood – mothers, in particular.”

The festival still had some space for a couple of last-minute inclusions, especially if a piece had come from directors whose work had been shown previously. Asheville-based filmmaker Robert Gaston (whose film “2 Minutes Later” played at the 2007 fest) wanted to show off his latest film, “Flight of the Cardinal,” at this year’s festival. Luckily, he got it in just in time.

“The day I was completing it, and actually was able to mail out a screener, was [Carl’s] final day of programming,” Gaston said. “So the timing was good and, thankfully, he let us in.”

Shot over a month in Robbinsville, “Flight” is a psychological thriller that Gaston said “happens to have gay characters.” But he said the movie, which will have its screening Aug. 15, has enough widespread appeal to attract both gay and straight audiences.

This is why Gaston thinks it’s appropriate for the gay and lesbian festival. “I think that’s one of the things that makes the programming there so smart,” Gaston said. “It’s that they do have pieces that reach beyond the community, the LGBT community.”

The festival will have some lively events to go with the film programming, including a stand-up show from veteran comedy writer and former Hollywood Square Bruce Vilanch on Aug. 13 and a plaza party on Aug. 14. Ultimately, this year’s festival hopes to reach the same level of success as last year’s, which was the highest-grossing since 2001.

“I hope we can, at least, match what we did last year,” Carl said. “I wasn’t really expecting last year to be the second-highest-attended and highest-grossing of all the LGBT fests that we’ve done. It just happened. I’m hoping that we can do that again.”

As long as the N.C. Gay and Lesbian Film Festival planners keep bringing in the good, interesting stuff, which people apparently can’t wait to give them, it appears that attendance will never be a problem.