Mister D: If you can, please help to benefit the Matthew Shepherd Foundation by bidding on Bruce Vilanch’s Bear or you may check out some others, as well, and bid on them. Please read the history of the bears and what they represent. I’ll provide links to the foundation, Mr. Vilanch’s bear, and to other celebrity bears. Thank you very much for your time. 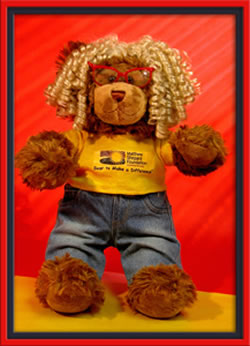 History of the Bears

After Matthew’s murder, hundreds of bears were created and donated in Matthew’s memory, as well as other victims of senseless violence and hate. These bears are displayed in the Teddy Bear Museum in Thermopolis, Wyoming and are used to educate local schoolchildren on diversity issues. They represent the international response to a hate crime that not only shook our nation, but also touched the hearts of children and adults throughout the world.

In February of 2002, a group of passionate individuals put together an idea for a silent auction of teddy bears that would benefit the Matthew Shepard Foundation. Many Denver local notables built teddy bears, and held a silent auction that raised over five-thousand dollars for the Foundation. In 2003 with the help of generous sponsors, the event moved to the Westin Tabor Center in downtown Denver and became a black-tie optional gala.

Now, the Matthew Shepard Foundation would like to continue the bear tradition with a fundraising and outreach campaign titled “Bear to Make a Difference” This will be an ongoing campaign in which celebrities are asked to “dress” or “build” a bear with their autograph. Proceeds will benefit the Matthew Shepard Foundation and our development of unique tools and programs to educate youth on diversity issues. The auction will occur during a Celebrity Teddy Bear live silent auction and reception to be held Saturday March 19, 2005 at the Westin Tabor Center Hotel Grand Ballroom in Denver, Colorado.

Bid On The Bruce Vilanch Bear
Other Celebrity Bears