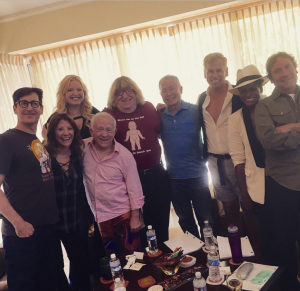 The brainchild (or grandparent?) of screenwriter Stan Zimmerman (who, back in the day, penned some fine “Golden Girls” episodes himself), “Silver Foxes” is certainly “inspired by” by the original “Girls, and will tell the tangling tales of four older gay men living (and likely grousing) together in Palm Springs — that is, if it gets picked up before the idea is shipped off to Shady Pines.

Right now, “Silver Foxes” exists in just two incomplete forms: 1) a scarcely documented table reading held at Zimmerman’s home that went swiftly viral on Instagram;
2) as a dream tumbling around in the heads of gay men everywhere. However, the latter could not have fathomed the fierceness of the foursome brought together for the former: the lead roles were read by George Takei, Leslie Jordan, Bruce Vilanch, and Todd Sherry. (OMG which one is the tramp?!) Rumor has it they’ve even written a cameo opportunity for Betty White.

This is one hip replacement.

I, for one, am screaming. Networks, meanwhile, are showing Zbornak levels of skepticism.

“Ageism and homophobia are not only keeping the show from getting picked up, but from even being read by a major network,” Zimmerman told HuffPo, all but raising his bugle to summon sleeping armies of slighted gays into clicking formation, let’s-get-Betty-White-on-“SNL” style.

This may or may not work, but here’s a slice of cheesecake and some truth: I’ve seen this move before. You flirt with the ones you don’t want (NBC, ABC, CBS — I mean, give me a break here) in order to draw the interest of the ones you do (Netflix, Hulu, Amazon). I’m pretty sure I learned that one from Blanche. Will it work? Depends.

Netflix seems not to have noticed it has absolutely no money for these sorts of things (might I and Tom Selleck suggest a reverse mortgage?) but it seems like a no-brainer that a comedy about aging gay men in Palm Springs would draw viewers like . . . well, aging gay men to Palm Springs.

In the meantime, not sure if you know this already, but you can get in a solid (or slightly mushed-up) four servings of “Golden Girls” each and every night from 11 p.m. to 1 a.m. Why so late? Because “The Golden Girls” is the raciest thing the Hallmark Channel airs by leaps and bounds (or short, careful steps).

(And with that, I conclude my housesitting for the vacationing Matthew Gilbert. Notice how I didn’t break anything. Thanks for letting me crash on your couch.)