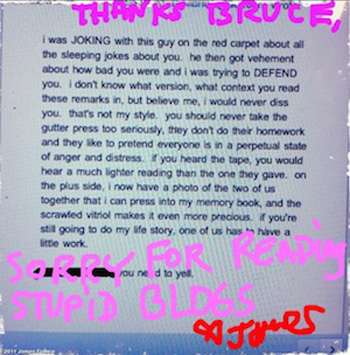 In an email to TheWrap Tuesday afternoon, Vilanch said of the little feud: “It’s all over. We’re on a honeymoon.”

James Franco has made up with Bruce Vilanch.

The two had been in a mini-feud since Monday, when Vulture reported that Vilanch, a long-time Oscar writer, apparently panned Franco’s performance as host.

Franco responded with a Tweet — which he has since deleted — reading, “Bruce, he let me down,” and a link to a photo mocking Vilanch. In that Twitter picture, Franco wrote, “James Franco f—– up the Oscars. Trust me, I know comedy. I mean, come on, I write for Bette Midler!”

Now, all is well.

Vilanch, who told TheWrap’s Steve Pond, “I still want to have his baby,” apparently sent an email to Franco explaining his comments.

“I was trying to defend you,” Vilanch wrote.”Believe me, I would never diss you. that’s not my style. you should never take the gutter press too seriously.”

Franco apparently liked what he saw, printed and posted Vilanch’s email, and linked to it on Twitter. This time, he wrote over it, “Thanks Bruce. Sorry for reading stupid blogs.”

No word on whether Vilanch will be with child.