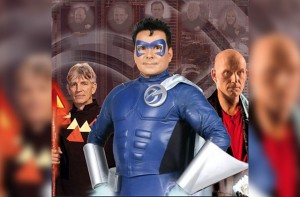 Big budget sequels are a given for superhero franchises like Spider Man, Iron Man and Superman, but the world’s first “out” gay superhero, Surge, is finally returning to the big screen after a 13-year hiatus.

Audiences at Florida Supercon will get a look at the final version of “Surge of Power: Revenge of the Sequel” on July 29 at 1:30 p.m.

Surge, a mild-mannered attorney who gains superpowers to fight homophobia and bullying, is the creation of Vincent J. Roth. Roth, also a corporate attorney by day and cosplay fan, wrote, produced and starred in both indie films.

“I grew up with the ‘Super Friends’ on Saturday morning cartoons and loved (superheroes),” recalled Roth. “For myself, as a boy, not even pre-gay, I hadn’t developed a gay identity. There’s an escapism (to superheroes): the ugly duckling to beautiful swan thing, an ordinary person transforming into the extraordinary, colorful costumes, champions standing up for the underdogs. That’s why people get enamored with them, there’s someone looking out for you.”

The first film, completed in 2004 and featured on the festival circuit, received a limited national distribution (including a run at the Classic Gateway Theatre in Fort Lauderdale in 2006). “Surge” quickly became a cult favorite for its celebrity cameos.

“It’s become part of our shtick,” explained Roth. “With the first film, it was a spoof with the campy flavor of the old Adam West ‘Batman’ TV show. He would have some miscellaneous celebrities pop in and we did that with ‘Surge’.”

Nichelle Nichols (“Star Trek”), Lou Ferrigno (“The Incredible Hulk”) and Noel Neill (Lois Lane, “The Adventures of Superman”) were among the 20 stars to appear and, when Roth approached them to return for the sequel, they were quick to recruit their friends.

Work on the sequel began in 2008, but “life got in the way,” said Roth. He began filming scenes in bits and starts before production “rebooted” three years ago. After several focus groups and public screenings—and subsequent tweaks—the final version of the film is headed to Fort Lauderdale.

The movie industry friends who advised Roth “every superhero film should have a sequel” have already been encouraging him to make “Surge” a trilogy and he’s certainly kept that possibility open in the script. He’s also developing “Big City Chronicles,” an internet variety show offering fans short webisodes, behind-the-scenes documentaries and cast interviews.

“It’s a way to keep fans engaged during those in-between times,” he said, while he negotiates a commercial distribution deal for the sequel. “My hope is to expand the (Surge) world even further.”

“Surge of Power: Revenge of the Sequel” will be screened on Saturday, July 29 at 1:30 p.m. at Florida Supercon, July 27 – 30 at the Broward County Convention Center, 1950 Eisenhower Ave. in Fort Lauderdale. For a schedule and tickets, go to FloridaSupercon.com. For more information about the film, visit SurgeOfPower.org.