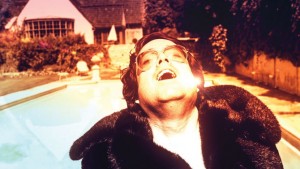 Taking the same workmanlike, conventional if sprightly approach to mixing talking-head and archival materials he did in “I Am Divine” and “Tab Hunter Confidential,” Schwarz chronicles his subject’s barreling up the entertainment-industry ladder through sheer determination and fandom. The Chicago suburbanite started out investing in legit theater enterprises (invariably involving fabled veteran headliners), moved to TV with the “Playboy’s Penthouse” series, then got involved in event planning (often extravagant showbiz launch parties) and talent management. In the latter vein, his biggest coup was revitalizing the career of Ann-Margret, who in the late ’60s had run her course as an overexposed “sex kitten.” Carr got her a much improved, long-lasting second wind on the Vegas stage, in TV specials and in better movies (including Oscar-nominated turns in “Carnal Knowledge” and “Tommy”).

Beyond producing a number of the broadcast variety specials still popular then, he dabbled in an odd assortment of enterprises wearing various hats: Putting together the Joe Namath-Ann-Margret biker flick “C.C. & Company” (1970); repackaging a cheesy Mexican disaster-cum-cannibal exploitation feature into the incongruously high-grossing “Survive!” (1976); playing key roles in the marketing of 1978’s best picture winner “The Deer Hunter” as well as producer Robert Stigwood’s music-driven hits “Tommy” and “Saturday Night Fever.” That gave him the clout to become the driving force behind a pet project, filming Broadway tuner “Grease” with “Fever”’s John Travolta and pop star Olivia Newton-John. It was a box-office smash, although Carr’s penchant for self-promotion wound up irking co-producer Stigwood, with whom relations became strained.

That was of little concern to Carr, who was now king of the mountain — even if studio executives and others often snickered behind his eccentrically caftan-clad back. If he couldn’t be one of the “beautiful people” (at one point he underwent gastric-bypass surgery to stem his ballooning weight), he could at least surround himself by them, including a stable of fame-aspiring pretty boys. Some of their surviving number, as well as several celebrity pals, attest to his indulgences and generosity here, though also to some drug-fueled mood swings.

The latter — as well as personal tastes more enthusiastic than refined — may have played a role in several spectacular, costly miscalculations. The most infamous was 1980’s tardy disco extravaganza “Can’t Stop the Music,” starring the Village People, Steve Guttenberg, Valerie Perrine and Bruce Jenner (now Caitlyn, and alongside Ann-Margret a notable interview holdout here). That $20 million boondoggle was directed by veteran actress Nancy Walker, who had almost no behind-the-camera experience and was dubbed by some participants “Can’t Stop the Cocaine.” Almost equally derided, if not quite as financially catastrophic (and an even bigger subsequent camp “classic”), was 1982’s ill-advised “Grease 2.”

Carr licked his wounds from these and other failures by turning to Broadway, where he assembled the major-league talents that would make the following year’s “La Cage aux Folles” not only a huge hit but the Great White Way’s first fully “out” gay-themed musical. Alas, this comeback triumph would soon be overshadowed by what had seemed his “dream come true” plum assignment: producing the Academy Awards broadcast.

While much of that 61st ceremony in 1989 proved influential (among other things, it introduced staple Bruce Vilanch as head comedy writer), the press heaped scorn on a long, awkward, starry and spoofy opening number that had Snow White (Eileen Bowman) traipsing past various new and aged stars singing nonsensically chosen songs (most infamously Rob Lowe’s rendition of “Proud Mary”). The intended absurdist humor missed the mark, humiliating Carr further when a roster of Hollywood bigwigs including some he considered close friends wrote an open letter castigating the Academy for this “embarrassment.”

While it uses this low ebb as a narrative bookend, “The Fabulous Allan Carr” adds insult to old injury by suggesting it was all Carr’s brainstorm — curiously failing to note that the campy concept and style were lifted whole from long-running San Francisco revue “Beach Blanket Babylon,” whose creator Steve Silver was very much involved in the telecast.

Practically exiled for this “crime,” Carr became a recluse before cancer claimed his life in 1999 at age 62. He did at least live to enjoy a successful 20th-anniversary rerelease of “Grease” the prior year.

A lot of colleagues both famous and non- provide amusing recollections of an over-the-top persona and the glittering excess he liked to surround himself with. One could wish for a less pedestrian package than the one Schwarz has provided (a few brief animations providing the most adventuresome touch), but then this story supplies quite enough kitschy, name-dropping flavor on its own, with or without additional stylistic filigreeing.