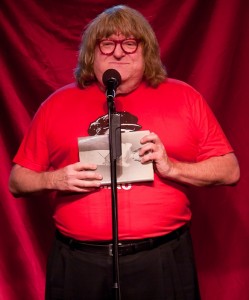 At 4pm central tomorrow weâ€™re talking to the wonderful Bruce Vilanch, Hollywoodâ€™s go-to comedy writer, best known for his appearances on seasons 1-4 of the revamped Hollywood Squares, along with Whoopi Goldberg.

For many years Bruce worked as the head comedy writer for the Tonys and the Oscars, and is loved by many in the entertainment industry for his work as a writer for Bette Midler, Cher, Richard Pryor, Lily Tomlin and Joan Rivers.

In the late 70s Bruce was hired by George Lucas to write the Star Wars Holiday Special, considered one of the most cringe-worthy and unintentionally hilarious TV specials of all time, mostly because it put the Star Wars characters in unusual situations, including Carrie Fisher as Princess Leia singing the â€œLife Dayâ€ song.

Over twenty years after its initial airdate, the Holiday Special has become a much-treasured bootleg video that most die-hard fans have in their collection. Weâ€™re talking to Bruce about his work as a writer, working with all the comedy greats and of course the Star Wars Holiday Special. What were they thinking?

Bruce Vilanch will be apearing with Carol Channing and Carole Cook at â€œHelp is on the Way,â€ Northern Californiaâ€™s largest annual AIDS benefit concert on Sunday Auguest 15 at the Herbst Theater in San Francisco.