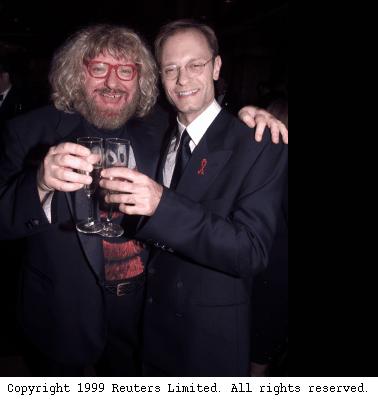 Picture: David had no involvement in this episode. I just liked the picture:-)

Mister V, being the true artisite that he is, confirmed to me that he injured himself while vocalizing and cleaning his house. Okay, I made up the cleaning part. But rest assured, he is okay.

A nice, friendly female impersonator lent him some shoes, but not the kind Edna Turnblad, from “Hairspray” would wear. According to Bruce, Edna wears “sensible fat-lady heels, low and blocked.” Bruce, on his method acting, bemoans, “Over-reaching, they call it. the suffering of the true artist is what I say. But, as the kidney stone remarked to the turd, this too shall pass. A little proctologist humor there. You never know when there’ll be a block of them in the house.”

I wonder, did Robert DeNiro start this way, too????

P.S. Mister V confirmed the info from TV Guide about the Judge Judy segment filmed with Bette and the CBS EYE!!! He said it was very funny, but they had really wanted it to be a surprise when we all went to the concert. So let’s all just forget we ever heard about it!!!!!