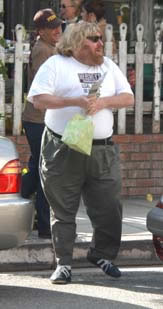 More than a month before Hairspray launches its national tour at the Morris Mechanic Theatre, tickets to the Tony Award-winning musical essentially have sold out.

But if you haven’t already bought yours, don’t despair. There’s still a chance that you can snag one of the coveted seats if your budget is flexible or if you are willing to take a chance and wait.

Clear Channel Entertainment, which manages the Mechanic Theatre and which also will run the renovated Hippodrome when it opens in February, has announced that no individual tickets are being sold for the two-week run of Hairspray.

Because of the opening of the Hippodrome, a formerly run-down Baltimore landmark, and the unusually strong slate of shows this season, “there has been a tremendous response to season ticket sales and a huge demand for group sales for the Broadway in Baltimore series,” said Marks Chowning, executive director of Clear Channel Baltimore. The Mechanic holds 1,600 theatergoers.

Besides Hairspray, the lineup for this season includes The Producers, which won more Tony Awards than any musical in history.

Subscribers are key to an organization’s financial stability, so they are given first crack at seats for hot shows. Tickets for the joint season at the Mechanic and Hippodrome went on sale March 27 and subscribers were allowed to buy a total of six Hairspray tickets. They gobbled them up, and it became apparent that there would not be any individual tickets left, Chowning said.

As much as Clear Channel officials would like to, they can’t extend the Sept. 9-21 run in Baltimore; Hairspray is scheduled to open in Hartford, Conn., Oct. 7.

So how can you still get tickets? There are two ways:

Keep checking the Mechanic Theatre box office or Ticketmaster closer to the date of the performance you want to attend. Chances are that at least some subscribers will be unable to use all of their tickets, and might turn some back at the last minute. If you are persistent and lucky, this can be a way to get great seats at the list price.

Hairspray, the sweetly silly show based on the film by John Waters starring a fat girl with dancin’ feet and a drag queen has generated enormous buzz since before it opened on Broadway last August.

In the national tour, the cross-dressing role of Edna Turnblad, originated on Broadway by Harvey Fierstein, will be played by Bruce Vilanch, an actor, writer and veteran of TV’s Hollywood Squares. Tubby teen Tracy Turnblad was portrayed on stage by Marissa Jaret Winokur; in the national tour, Tracy will be played by Carly Jib, a 19- year-old from Michigan making her professional debut.