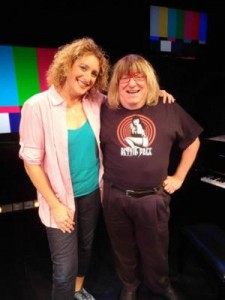 The Alden in McLean bring the NSFW (not safe for work) humor of Judy Gold and Bruce Vilanch for a late show at 9 p.m. on Saturday, Nov. 7. Tickets are $35, $20 for McLean Community Center (MCC) tax district residents. The Alden is located at 1234 Ingleside Avenue, inside MCC.

In the show, entitled “An Evening with Bruce Vilanch and Judy Gold,” the comedians pair up for separate stand-up sets united by their gay, Jewish identities and raunchy, sidesplitting observations. One of the most sought-after jokesmiths in the entertainment industry, Vilanch has become a recognizable face in his own right, thanks in part to his stint as a regular on the television show “Hollywood Squares,” for which he also served as head writer. He has written for virtually every awards show and Hollywood comedian, including most of the Oscar casts over the past 20 years-his Jack Palance-inspired jokes have famously passed through the lips of Billy Crystal.

Gold gets around, everywhere from her Comedy Central and HBO specials to cohosting “The View,” to starring Off-Broadway in her two acclaimed long-running hit shows, including “25 Questions for a Jewish Mother.” She has won two Emmy Awards for her work on “The Rosie O’Donnell Show.” Gold is an observant Jew, 6 feet 3 inches tall and a lesbian mother of two.

Together, Vilanch and Gold will fill the order of making the audience laugh and laugh.

Please note: This show is for mature audiences only.