Out & About Nashville
Profile: Actor and Comedian Bruce Vilanch
By William Shutes
December 13, 2019

If Barbra Streisand will always own the title Funny Girl from her star-making turn in the musical of the same name, Bruce Vilanch is and has been Hollywood’s Funny Guy for decades.  Known behind the scenes for a razor wit and in front of the camera as the ham sidekick to Whoopi Goldberg’s center square in the late-90s reboot of the game show, Hollywood Squares, Vilanch is making a star turn in the 2019 TPAC presentation of the Lythgoe Family Panto, Aladdin and His Winter Wish.  Vilanch spoke with me last month as he prepared to head to Nashville for this Christmas spectacular.

Will:  So first of all, you’ve pretty much been the go-to guy for decades when a celebrity needs Grade-A material to get the audience roaring with laughter. You’ve won Emmy Awards for your quick wit.  I watched a video while I was doing my preparation when you talk about the Academy Awards with Billy Crystal, and basically rewriting the script as the show went on so that you could just keep it fresh and keep it topical.  Did funny come to you naturally or is it something that evolved and that you grew into?

Vilanch:  It’s an interesting proposition.  I mean, I guess it came to me naturally.  I was sort of surrounded, also, by people who were funny and had my mother’s family in particular who were really funny.  But I think that when you’re fat, ungainly, unathletic, and a kid you have to work up some defenses.  And I discovered I could use humor as a way to, as Whoopi (Goldberg) says, it gives you a chance to run.  It disarmed them, and so I used that a lot when I was a kid.  And I don’t know where that came from. You know I spent a lot of time making faces in the mirror and all that and my mother was very theatrical so I had that to look up to.

And so I suppose it’s just one of those things we don’t know that we have it’s like some people have math.  I still don’t have math.  I think it’s one of those indefinable chemical things that happened in the brain that we think we know but we really don’t.

Will:  It’s interesting when you talk to, you know, so many different drag queens and comedians who really do identify that you know, it was being an other. That really sort of put them on to that pathway.

I was on The View once Joy Behar said, “Well, I had a very happy childhood and I turned out alright.”  I’m not gonna fight that.  When you feel you’re not a conventional person, you have to find other ways.  And I think they are found for you naturally if you pay attention to them, for sure.

Will:  Christmas pantomime is really sort of a peculiarly English form of entertainment and Nashville’s developed a love for it.  Last year, they did a presentation of a Peter Pan panto that was very well received.  In Aladdin and His Winter Wish, you’re playing the Widow Twanky who, in the past, has been played by other huge names like Sir Ian McKellen and John Inman from Are You Being Served?  Have you ever had any experience with panto before?

Vilanch:  We did Aladdin and His Winter Wish at the Pasadena Playhouse three or four years ago.  We had a blast.  It was a great success and we had a lot of fun.  The Lythgoes on doing this all over the country now I mean, they’re in Salt Lake City and they’re down in Laguna.  So this is in the new great tradition, but I mean the big names have done them on stage in London because it is it’s it’s one of those English Christmas things.  It’s a chance for very serious actors to carry on and camp it up.  So it’s like taking a vacation from seeing was “real” theater that is very heavy minded and serious and just letting everybody kind of take a romp.  We take these fairy tales, stuff them with pop songs, and everybody just gets to ham it up like crazy.  It’s really family entertainment,

Will:  You’re truly one of the biggest showbiz mavens that we have.  You’ve written for everybody from Bette Midler to The Brady Bunch.  You’ve been a Hollywood Square And you’ve even stepped into Edna Turnblad’s shoes in Hairspray.  Across your very storied career, do you have one or two achievements of which you find yourself most proud?

Vilanch:  Well, I did 25 Oscar shows and so I guess I’m proud of that.  We won two Emmys in that crop, which is a fabulous roller coaster ride to be on.  And Hairspray, of course, is high up there and being on Hollywood Squares for six years, to the left of Whoopi, if that’s possible. And after 20 years in Hollywood suddenly becoming a famous person has actually been the strangest thing of all.

I point to those like career highs, but I’m proud that I’ve used whatever talent and fame that I’ve got to promote things I’m interested in for the betterment of mankind.  To get civil rights for gay people, promote Jewish causes, and the things that I’m interested in within the communities I’m a part of to try and make the world better for them.

Will:  The Hollywood Reporter – I love this – has referred to you as La La land’s unofficial gay mascot.  Has the nature of being out and proud of being out in Hollywood changed much in the last decade or is it still a lot of the same old story of stars having to hide just inside the closet to keep their careers?

Vilanch:  Well, I don’t think that happens outside of the acting discipline.  The rest of the world is out.  The executives… I think even below the line in the guilds, which have traditionally been bastions of longshoremen kind of On the Waterfront sort of thinking, I think those have opened up, too.  And they’ve opened up to women, which is even bigger than just gay people because there are more women than there are gay people.

But the last thing to fall is the acting thing and that’s basically because we’re selling illusion and the question that everybody asks when they cast somebody is, “Can he kiss the girl?  Will the audience buy him if he kisses the girl?”  And so there’s this raging debate about straight actors should only play straight parts and gay actors should only play gay parts and all of this middle of all these are transgender people saying, “Well, what about us?”

So it’s gotten very confused, but I think that will be the last thing to go.  And I think that won’t happen until you have a number of big deal athletes in major league sports who are out and proud.  And our stars… that’s going to be tough to do.  That will always be tough to do because, you know, this is the last bastion of macho.  And macho has to change.  Macho has to change to admit that there are other kinds of personalities besides macho ones.

Will:  That’s something that Nashville faces.  You have stars that had great careers and then came out, and suddenly they became pariahs.  Of course, you’ve got rumors that swirl about some stars and if they ever are able to come out.

Vilanch:  I did a benefit with Ty Herndon a few weeks ago.  We were talking about that.  At this benefit, he came out and sang his big hit “What Mattered Most.”  And then he said, “Now I’m going to sing it the way I wrote it: with the proper pronouns.  He went and sang it over again.  Of course, it was a knockout for that crowd.  He was illustrating his struggle.

It’s all part of the whole macho culture, the old good old boy syndrome.  But what’s interesting now is that the Me Too movement has come along and it has just shown such a bright light on that whole idea of what is acceptable, what is “good old boy behavior,” what is macho, when you cross the line, and white privilege and male privilege and all of that stuff.  It’s all now under a microscope, a legal microscope, among others.  So this is this is the beginning of change, I think.

Will:  I ask this final question of a lot of people who’ve had really interesting, exemplary careers with plenty to reflect back on. What would you want to tell your younger self if you could?

Vilanch:  I think I would, I would probably say, “Don’t be so hard on yourself.  You got it, run with it.”  Self-doubt is always there, whether you like it or not, but to make it the theme of your life is crippling.  And I found that to be the case. Not that often, obviously, but occasionally.

If I had to tell myself, I’d probably also say less pizza.  That would really be what that would be the first thing I would say is less pizza.

The run of “Aladdin and His Winter Wish” continues at TPAC’s Johnson Theatre until December 22nd.  Tickets are available at TPAC.org and at the box office. 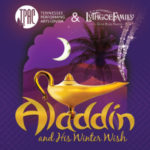 Aladdin And His Winter Wish

KNOW BEFORE YOU GO

Valet parking is not available during weekday matinee performances.

“Magic for the holidays, a fun family ride!”, raves the Los Angeles Times. The age-old fairytale of Aladdin is given a modern twist with pop music, from “Treasure” by Bruno Mars to Ray Charles’ “You Don’t Know Me”, magic, and comedy.

Helped by the magical Genie, Aladdin meets and falls in love with the Princess and later has to save her from the clutches of the evil magician Abanazar. With his hopeless brother Wishee Washee alongside him, will Aladdin defeat the evil magician and make all of his dreams come true?
From the producers of last year’s hit Peter Pan and Tinker Bell, Aladdin and His Winter Wish is the perfect family show all ages will wish to see this holiday season!