Theatermania
Chilina Kennedy and More Set for A Sign of the Times Reading Prior to Goodspeed Production
Bethany Rickwald • Connecticut • Apr 20, 2016 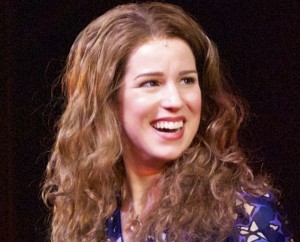 Casting has been announced for a private industry reading of Bruce Vilanch‘s A Sign of the Times musical, which will have a production at Goodspeed’s Norma Terris Theatrefrom July 29-September 4. The reading will take place April 28-29.

Set in 1965, the plot of A Sign of the Times is described as follows: “The pulse of a changing era lures Cindy from Middle America to the swirl of Manhattan. Unexpected friends, lovers, careers, and conflicts are all a subway ride away in a pop-fueled new musical featuring songs made famous by Petula Clark and other hit makers of the day.” The show’s songs include “I Know a Place,” “The Shoop Shoop Song,” “If I Can Dream,” and more.

The cast of the staged presentation will feature Chilina Kennedy (Beautiful — The Carole King Musical) as Cindy, Ryan Silverman (Side Show) as Brian, Bryan Fenkart (Memphis) as Dennis, Marrick Smith (Fun Home) as Matt, and Crystal Lucas-Perry as Tanya.

The cast of the Goodspeed production will be announced shortly.