ShootOnline
“Child Of The 70’s” Permanently Featured In The Hollywood Museum Exhibit Reel To Real: Portrayal And Perceptions Of Gays In Hollywood
By ShootOnline Staff
Thursday, Sep. 15, 2016 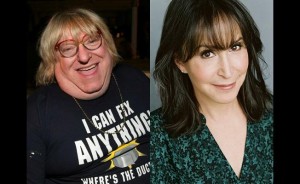 Popular international TV and web series “Child of the 70’s” was featured in the Hollywood Museum exhibit “Reel to Real: Portrayals and Perceptions of Gays in Hollywood.”  The landmark, third annual exhibition was developed in alliance with Los Angeles City Councilmember Mitch O’ Farrell to highlight LGBT characters and icons in film and television from Hollywood’s past and present. The “Reel to Real: Portrayal and Perceptions of Gays in Hollywood” exhibit ran at the museum’s historic Max Factor Building in the heart of Hollywood.  This was the first time the show was featured in the exhibit and was simultaneously inducted as a permanent part of it.

“It was such a great honor to be recognized in this exhibit,” says the show’s creator/writer/producer, Michael Vaccaro. “The rest of the cast and I are moved by the museum’s dedication to the gay and lesbian entertainment community.”  Now in its fourth season and seen on OUT TV, “Child of the 70’s” is a parody of and a loving homage to the sitcoms Vaccaro loved growing up in the 1970s.  Vaccaro (“A Play on Words”) portrays the central protagonist of the series, Carlo Perdente, a wannabe actor who is trying to break into the entertainment business by being an assistant to the narcissistic and egomaniacal 1970s TV star KiKi Lawrence played by Ann Walker (“Sordid Lives”).

It also stars a prolific number of actors from film and television during that decade including Susan Olson who played Cindy Brady in “The Brady Bunch,” Ted Lange who played bartender Isaac Washington on “The Love Boat” and Donna Pescow in the title role on “Angie” and Annette in “Saturday Night Fever.”  Additional cast members from the era include Gina Hecht (“Mork and Mindy”), Amy Linker (“Square Pegs”), Carole Ita White (“Laverne and Shirley“) and the original Cowboy from The Village People, Randy Jones.

“Child of the 70’s is directed by Tom Pardoe (“It’s Your Move) and co-written by Terrence Moss.  Shooting for season five begins this fall.

For more information on “Child of the 70’s” please visit www.theofficialchildofthe70s.com