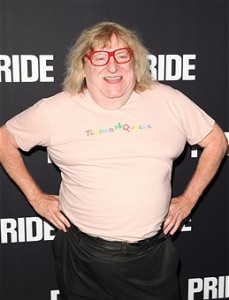 The Legacy Walk’s markers serve as an “outdoor classroom” for bullied LGBTQ youth who come for guided tours in order to learn about historically significant positive LGBT role models whose contributions have made an incalculable difference in the world we share.

On October 15, 2016 they welcome two LGBT activist superstars to the Legacy Walk: transgender icon Sylvia Rivera from the Stonewall Era, and gay film activist/historian Vito Russo, who co-founded both ACT UP (AIDS Coalition to Unleash Power) and GLAAD (Gay and Lesbian Alliance Against Defamation). Their considerable legacies will soon be added to the 35 incredible stories of achievement which already line the only streetscape of its kind in existence.

This all-day tribute will feature legendary gay activist Cleve Jones, Chicago transgender spokesperson Myles Brady-Davis, Emmy Award-Winning writer-producer-actor Bruce Vilanch, and trans pioneer Judy Bowenwiener, a close personal friend of Sylvia and Marsha P. Johnson from the post-Stonewall Era. Judy will be talking about their involvement as three trans women in New York’s Gay Activist Alliance (GAA). She will be joined by Phillip Raia, who worked with both Vito and Sylvia in GAA in the 1970s. Never have all these people been brought together for a celebration quite like this.

The event will be in three parts:

Tickets for this multi-part event are available for $30, $50, and $100 and include light appetizers and variable bar service. There will also be raffle prizes and door prizes. LGBT people from throughout the metropolitan area are expected to turn out to celebrate this unique Chicago cultural institution—built by our community, for our community—in this salute to the contributions of LGBT people.

TICKETS CAN BE PURCHASED AT: