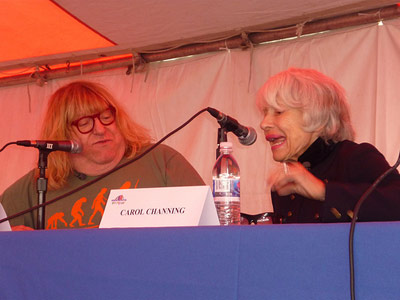 Carol Channing is such an endearing, sharp, funny personality that director Dori Berinstein could easily have just thrown her camera on a tripod, have the 90-year-old musical theater legend spin anecdotes for an hour and a half, and had a great documentary. Thankfully, what she made is even better. Sure, Channing still tells those stories about her life and stage career in her paradoxically inimitable-yet-oft-imitated style. But there are also heartfelt testimonies from fellow actors and personalities, most legends in their own right, about how talented and genuine she is.

From Hello, Dolly composer Jerry Herman to Debbie Reynolds to Chita Rivera to a professional Carol Channing impersonator, the film paints an affectionate portrait of a performer who so loves and embodies musical comedy, that if it hadnâ€™t existed before she did, surely her elemental talent would have summoned and created it for her out of pixie dust, brass, feathers, plywood, and of course, diamonds.

As Hollywood banter writer Bruce Vilanch says to a crowd of fans at a live moderated interview, most who love the lady will likely already know almost all there is to know about her. But for Channing buffs and the uninitiated alike, thereâ€™s still plenty to hoot about, such as stories of her first screen kiss with a certain huge Hollywood leading man, awkwardly choreographed down to the exact arm positioning, or footage of the supposedly dumb blonde hilariously lapsing into a Haitian corn-shucking ditty on an old talk show.

While many things about Channing are certainly large, some of the most affective and telling parts of the doc are actually in small moments. Recalling a story from her youth, she mentions someone named Bobby Shmaltz, and in the next breath gives an aside of, â€œOh, you donâ€™t know him,â€ seemingly speaking to the off-camera interviewer and forgetting sheâ€™s in front of a virtual audience. Or does she forget? In that one instant, we can see how effortlessly, through behavior, she keeps herself off the pedestal of celebrity and draws anyone into her sphere with the congeniality of an old friend. Itâ€™s easy to see how everyone from chorus boys to presidents are enamored by her.

And then thereâ€™s husband Harry Kullijian, Carolâ€™s childhood sweetheart, reunited in marriage after 70-odd years apart. In the film, the two travel to various functions and revisit some of the important sites of their early courtship in San Francisco. Simply put, the two are ridiculously adorable and clearly overjoyed to be together again after all this time. Tragically, Kullijian passed just a few weeks ago in December, which likely happened too late to be noted in the film, and far too soon at any rate. All the more luck, then, that we have this small but moving document of the couple so we can share some of their spark for just a little bit.

Carol Channing: Larger than Life is like a warm cinematic hug from Shubert Alley, not to be missed by anyone with even the remotest passing interest in Channing or Broadway history.