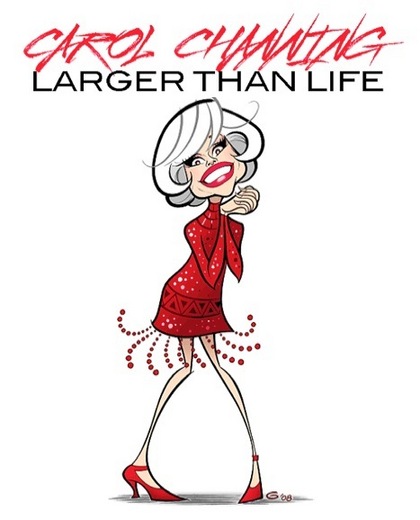 “Carol Channing: Larger Than Life,” a new documentary about the life of Tony-winning Hello, Dolly! star Carol Channing, will arrive in theatres Jan. 20, 2012.

“The story of legendary performer Carol Channing’s life is as colorful as the lipstick on her big, bright smile,” according to production notes. In the film director Bernstein, with co-writer Adam Zucker, capture the “magic and vivacity of the 90-year-old icon â€“ both onstage and off…past and present. The film is both an intimate love story and a rarefied journey inside Broadway’s most glamorous era. It is, above all, a look at an inspiring, incomparable and always entertaining American legend.”

Entertainment One US is distributing the film.

In addition to her 1964 Tony for playing Dolly Levi in Hello, Dolly!, Channing received a Special Tony in 1968 and a Lifetime Achievement Tony in 1995.