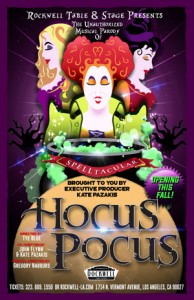 Executive Producer Kate Pazakis has done it again with her latest UMPO production THE UNAUTHORIZED MUSICAL PARODY OF HOCUS POCUS. Director Tye Blue effectively corrals his vocally gifted cast in gloriously performing re-purposed pop tunes in between delivering Pazakis and John Flynn’s cleverly written homage to the 1993 film Hocus Pocus (starring Bette Midler, Sarah Jessica Parker and Kathy Najimy). No worries if you haven’t seen the movie. You will be howling anyway at this Halloween tale of three witches returning from the dead 300 years later to wreck havoc in (where else?) Salem, Massachusetts. A great part of the fun’s recognizing ‘vintage’ pop songs that have been re-fitted into the HOCUS POCUS narrative.

Totally inhabiting the Bette Midler part of Winifred Sanderson (the oldest sister of the three), Marissa Jaret Winokur readily displays the reasons she won the 2003 Tony Award for Best Musical Actress (HAIRSPRAY). Winokur spouts Winifred’s lines out with the best comic timing and warbles Bette’s songs (“The Rose,” “From a Distance”) most beautifully. Another treat has Winokur embellish the film’s “I Put a Spell On You.”

Cindy Sciacca, commands in the Kathy Najimy role of Mary Sanderson, the middle sis. Only in live theatre, the unexpected interruptions or miscues can bring interesting results. Sciacca had an unexpected incident and handled it so well, she literally stopped the show until the uproarious laughter finally subsided minutes later. That’s a great pro move!

Ava Gaudet quite assuredly filled Carrie Bradshaw’s Manolos as Sarah Sanderson (played by Sarah Jessica Parker in the film). Bars of the recognizable “Sex and the City” theme would frequently play under Gaudet’s on-target Carrie-esque lines.

Tom DeTrinis appeared to be having the best of fun as Binx, the little boy turned into a cat. DeTrinis’ well-timed paw licking or tail gesturing would consistently grab your attention and your laugh reflexes.

Benjamin Schrader scored as the virginal Max Dennison as he pursued the more sexually- knowledgeable Allison (winningly played by Kelley Jakle). Their seduction scene managed to be so funny, yet so hot!

Opening night had Bruce Vilanch as Guest Narrator introducing the evening with his dependably funny (and topical) takes on the Sanderson Sisters. Peter Allen Vogt quite ably resumed the Narrator role for the rest of the evening offering witty barbs in between (and sometimes, during) sips of various liquors. Too funny!

Kudos to costumer Chadd McMillan for his spot-on Sanderson Sisters outfits, the Blinx cat jumpsuit; as well as, the attire of the regular humans of the townsfolk. Shout-out to BobbiePinz/Bobbie Zlotnik for the re-created Sanderson Sisters wigs.

Hard to find the perfect seat in the Rockwell main room as the action uses not only the stage, but every inch of the room (and a few willing laps).

The spot-on UMPO band (led by musical director Gregory Nabours on piano; with Blake Estrada on bass, Emily Rosenfield on guitar and Gregory Sadler on drums) rocked as always, provided the driving musicality to the UMPO HOCUS POCUS soundtrack which includes: AC/DC’s “Highway to Hell,” En Vogue’s “Free Your Mind,” Bonnie Tyler’s “Holding Out for a Hero,” Backstreet Boys’ “Backstreet’s Back.”

With the UMPO’s practice of double casting (and more than occasional surprise guest casting), who knows which singing and dancing talents you’ll get to see in THE UNAUTHORIZED MUSICAL PARODY OF HOCUS POCUS. But they’ll probably, most assuredly, be all great!