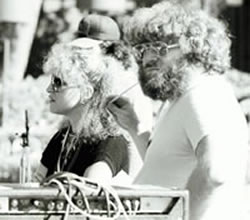 Perhaps the best commentary on the Hollywood whirl that is part of humorist Bruce Vilanch‘s life is this: The day after he appears at a suburban comedy club, he’ll fly back to Tinselville to learn whether he won an Emmy. What for?

Writing for another awards show, the Oscars.

“Some day, they’ll have an awards show just for awards shows,” said the 43-year-old former Chicagoan.

And while that may seem odd to outsiders, it is more for Vilanch’s comedy dicer. The sit-down comic, who will appear with a pianist, does a monologue that he describes as “like Spalding Gray, only funny.”

His act will have a mix of tributes to Hollywood legends such as Sophie Tucker, stories about his newspapering days on the defunct Chicago Today, and some parody songs.

The self-described “nice Jewish boy from New Jersey” had ties with the stylish stars of yesterday. Such a bond caused him to link up with the then-little-known torch singer Bette Midler. Eventually, after touring with her troupe and writing for television variety shows, he was given a chance to write for a Manhattan Transfer TV series.

“It was a little daunting to move here,” he said from his Los Angeles home.

But things fell his way. Eventually, he wrote for everyone from Billy Crystal to Shirley MacLaine, and took turns as an actor and songwriter. His writing already has earned him six Emmy Awards.

Not all of his assignments make him glow. There is the burden of scripting the so-called American Comedy Awards.

“They’re the one awards show which has the mandate to be funny,” while, at the same time, having no real legitimacy. Therefore, many fringe comics are featured because bigger names have no interest.

When not writing or doing his vaudevillesque turns in Los Angeles and New York, Vilanch performs benefits – so many, in fact, that he calls himself “Benefits R Us.”