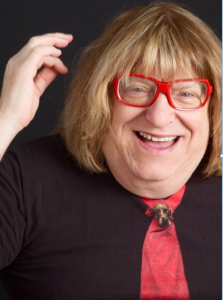 Returning from last year’s hugely successful inaugural “Panto at The Playhouse” production of A SNOW WHITE CHRISTMAS, will be director Bonnie Lythgoe (“So You Think You Can Dance”), choreographer Spencer Liff (Emmy nominee “So You Think You Can Dance”) and musical director Michael Orland (“American Idol”). Performances will begin December 11 through December 29, with a gala press opening night on Wednesday, December 11, 2012, at 7:00 p.m. at The Pasadena Playhouse. Single tickets are also now on sale.

Commenting on the announcement, lead producers at Lythgoe Family Productions, Kris and Becky Lythgoe said, “We are so thrilled to have Bruce Vilanch join the cast of ALADDIN AND HIS WINTER WISH. Widow Twankey (Aladdin’s Mother in British Panto) is a role that demands expert comedic timing and improv skill, a role played by the top comedians and actors in the UK — including Sir Ian McKellen. Bruce Vilanch with his musical theatre prowess and comedic finesse was born to play the role of Widow Twankey. With Mr. Vilanch our audiences are assured a night of holiday entertainment and laughter they will not soon forget!”

Bruce Vilanch is no stranger to dressing up like a woman, on stage at least. For two years he starred as Edna Turnblad in Hairspray, playing the Pantages in Hollywood and then a year on Broadway. As a man, and a man with a beard, yet, he could be found to the left of Whoopi Goldberg, if that’s possible, on “Hollywood Squares” for half a dozen years. He’s won a bunch of Emmys, and lost a bunch more, for his television writing, which includes 23 Oscar broadcasts. He is also a songwriter, a comedian with a one-man show that tours all over the place and a print model for magazines that have extra-large pages. Make that double XL. You can find him on Netflix as the star of a documentary the Weinsteins made about him, entitled Get Bruce. And he went on “Celebrity Fit Club” and lost 21 lbs, but he found them. happy new year! www.wegotbruce.com.

Lythgoe Family Productions produces fun, musical theatre the whole family can enjoy. Known for their creativity and involvement in television hits “American Idol” and “So You Think You Can Dance,” the Lythgoes are dedicated to bringing affordable theatre to families across America. Based on the Grimm fairytales, each story has been modernized with topical scripts for parents and well known pop songs for kids. The Lythgoes pride themselves on creating a memorable experience a family can share together.

An updated version of the classic Arabian Nights tale, in the style of a traditional British family Panto, ALADDIN AND HIS WINTER WISH is a singing, swinging and soaring adventure that features family-friendly magic, with a comedic twist, dancing (with “So You Think You Can Dance” alumni), a live pony and contemporary music from “Jai Ho” (Slumdog Millionaire) to “Treasure” (Bruno Mars) and many more. A Panto is known for its interactive style and humor that appeals to everyone from ages 2 – 102! Before every performance, guests and their families are invited to enjoy a Citi Presents: Winter Wonderland event in The Playhouse’s Engemann Family Courtyard, complete with holiday carolers, crafts, activities, games, and photo opportunities, as well as special on-site benefits for Citi cardmembers.”

In addition to director Bonnie Lythgoe, the creative team for ALADDIN AND HIS WINTER WISH includes choreography by Spencer Liff (Emmy nominee for “So You Think You Can Dance”), musical direction by Michael Orland (“American Idol”), book by Kris Lythgoe, scenic and costume design by Lythgoe Family Productions and LFP producers include Kris Lythgoe, Bonnie Lythgoe, Becky Lythgoe and Jason Haigh Ellery.

ALADDIN AND HIS WINTER WISH will be performed December 11 – 29, 2013 with a gala press opening on Wednesday, December 11, 2013, at 7:00 p.m. Single tickets are now on sale. Citi cardmembers can purchase Citi Cardmember tickets with special Preferred Pricing, as well as VIP benefits and access for select shows at www.citiprivatepass.com.

Tickets for ALADDIN AND HIS WINTER WISH range from $34.00 – $75.00, plus Premium. Child single tickets are available for Rear Orchestra and Rear Mezzanine ranging from $25.00 – $48.00. Golden Tickets are available for an additional $100.00 each and are limited to 10 Golden Tickets per performance. A Golden Ticket allows the ticketholder (children only) a special on-stage experience during the production. Ticket price includes pre-show Winter Wonderland courtyard festivities with carolers, crafts, games, visits with Santa and other surprises. Service and theatre restoration fees apply to all purchases.

Two student matinee performances, allowing local school children to see ALADDIN AND HIS WINTER WISH, have been scheduled for December 12 and 13. Ovation, America’s only arts network and the home of arts-centric series including “James Franco Presents” (James Franco), “The Fashion Fund” (Anna Wintour), and “A Young Doctor’s Notebook” (Jon Hamm and Daniel Radcliffe) will once again sponsor transportation for the student matinees, allowing over 1,500 children the opportunity to experience the arts for the very first time.