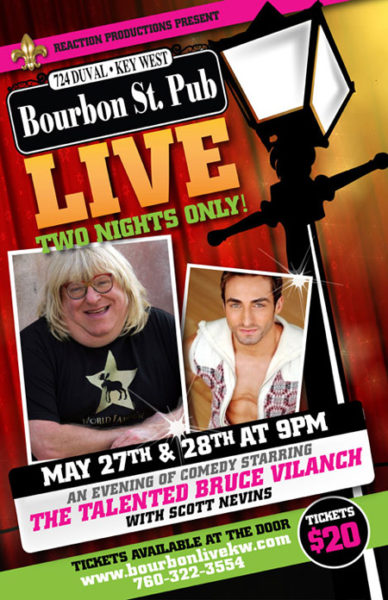 Bruce Vilanch became well known as a wisecracking regular on seasons 1-4 of the revamped Hollywood Squares, appearing with Whoopi Goldberg. Tourists spending Memorial Day in Key West will have the opportunity to enjoy an evening with Vilanch as he makes a special appearance. Vilanchâ€™s one man show will take place at Key Westâ€™s premiere gay bar, the Bourbon St. Pub.

“Viper-tongued Vilanch” is a multi-talented comedian whose career includes writing comedy material for numerous award shows, celebrities, as well as using his musical talent performing as Edna Turnbald in the national touring version of “Hairspray, the Musical”. Vilanch has also made it to the big screen in the movie You Donâ€™t Mess with the Zohan and has had many cameos either as himself or in character.

The opening for Vilanch will be award-winning TV personality and host, the “Hilarious Hottie”, Scott Nevins. Nevins seems to be taking showbiz by storm on the TruTV hit show The Smoking Gun Presents, with critics calling him “A young, sexy, gay-er, Kathy Griffin“. This gorgeous guy will provide a performance jam packed with insider Hollywood gossip, outrageous tales and personal anecdotes.

Performances at the Bourbon St. Pub will take place Thursday and Friday, May 27 and 28. Showtime is at 9 p.m. and tickets are only $25. If you are looking to vacation in Key West during Memorial Day Weekend, consider a stay at the Knowles House Bed and Breakfast to make your Memorial celebration memorable.