Hal Sparks (Queer As Folk) and openly gay comedians Bruce Vilanch and Lily Tomlin will perform at an April 5 “Laughing Is Good…” fundraiser to support California State Assembly candidate Torie Osborn, according to a press release. The event, which will also feature other Queer As Folk cast members, will take place at the Directors Guild of America in Los Angeles. Osborn has been part of the Liberty Hill Foundation and the Los Angeles Gay & Lesbian Center. 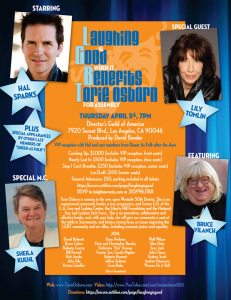