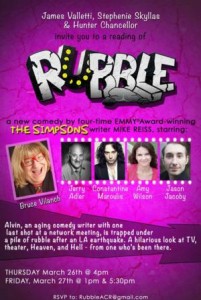 The story of RUBBLE is as follows: Alvin (Vilanch), an aging, down-on-his-luck comedy writer who — much to his chagrin — has narrowly escaped fortune, fame, and Emmy awards, is on a last-chance meeting with a network executive. During a spirited pitch of his new series idea, “My Brother, The Pope,” a massive earthquake hits LA, leaving him buried up to his neck in a pile of rubble. What ensues are a series of hilarious visits – from his older-and-more-useless-than-dirt agent Lee (Adler) and his ex-wife Brie (Wilson), to a pompous Dad (Still) and a singing and dancing Jesus (Maroulis). Will Alvin be saved from a miserable fate, or will it be “death by showbiz,” forgotten under a mound of trash on a studio lot while his agent makes reservations at The Olive Garden…? RUBBLE is a hilarious look at TV, theater, Heaven and Hell…from one who’s been there.

Incidental music is by Christopher Howatt, casting is by Daryl Eisenberg Casting. Management services for the reading are by Stephenie Skyllas/Hunter Chancellor and Brierpatch Productions, and the Stage Manager is Alex Hajjar.